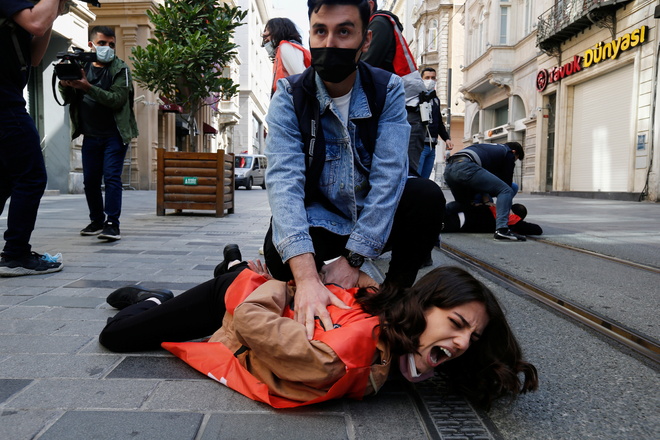 Workers and union leaders dusted off bullhorns and flags that had stayed furled during coronavirus lockdowns for slimmed down but still boisterous May Day marches on Saturday, demanding more labour protections amid a pandemic that has turned economies and workplaces upside down.

In countries that mark May 1 as International Labour Day, the annual celebration of workers' rights produced a rare sight during the pandemic: large and closely packed crowds, with marchers striding shoulder-to-shoulder with clenched fists behind banners. But in Turkey and the Philippines, police prevented May Day protests, enforcing virus lockdowns.

In the Philippine capital of Manila, where a month-long coronavirus lockdown has been extended by two weeks, the police prevented hundreds of workers from demonstrating at a public plaza. In Turkey, a few labour leaders were allowed to lay wreaths in Istanbul's Taksim Square but the iot police stopped many others from reaching the plaza.

In France, political leaders on the far right and the far left, who are expected to be President Emmanuel Macron's main challengers if he stands for re-election next year, tore into his policies and his handling of the pandemic. Far-left leader Jean-Luc Melenchon told marchers: "I hope that on May 1, 2022, I can come back to see you as President of the republic.”

Broadcaster BFM-TV reported that the French riot police fired small amounts of tear gas at two of the dozens of rallies called nationwide.

Police in Paris said they made 10 arrests. But the majority of the dozens of marches called nationwide in France passed off without incident. In Germany, where previous May Day demonstrations have often turned violent, police deployed thousands of officers. — AP