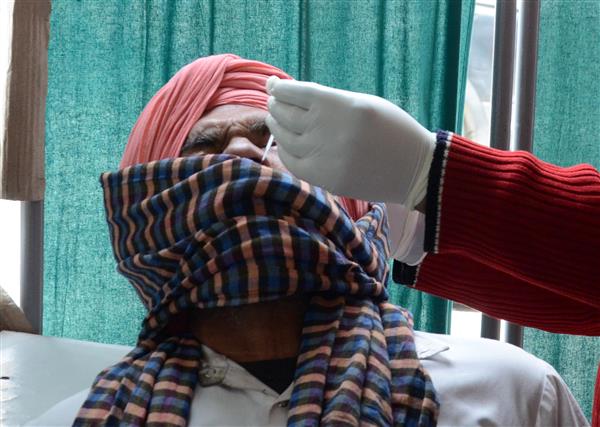 With three deaths reported due to Covid-19 in the last 24 hours, the toll increased to 1,630 in the district on Saturday. Photo: Sunil Kumar

With three deaths reported due to Covid-19 in the last 24 hours, the toll increased to 1,630 in the district on Saturday. The deceased have been identified as Pardumanjit Singh, a 66-year-old resident of Ranjit Avenue; Satinder Kaur (70) of New Amritsar and Amarjit Kaur (74) of Dolonangal village. 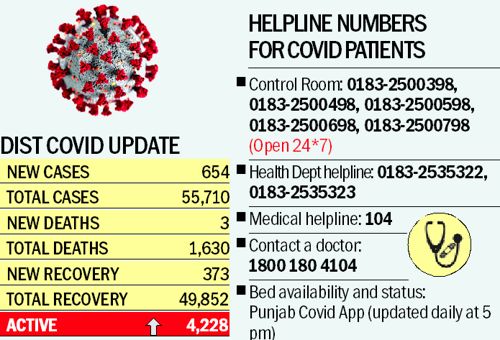 The district Health Department reported 654 cases on Saturday, with which the total count increased to 55,710. Of these, 550 are new cases, while 104 are contacts of positive patients.

The health authorities have also reported the recovery of 373 patients, with which the total recovery count increased to 49,852. The district, at present, has a total of 4,228 active cases.

Meanwhile 22,454 residents were inoculated during the ongoing vaccination drive. Of these, 10,260 received the first dose, 11,722 received the second dose and 472 received the third dose. A total of 1280 children in the age group of 15 to 17 years were vaccinated on Saturday.

As many as 254 persons tested positive for the virus in the district on Saturday, with which the active caseload increased to 1,132. Civil Surgeon Dr Rohit Mehta said the toll due to the disease stands at 383. The teams of the department collected 2,000 samples to be tested for the virus. To prevent the disease, 6,839 jabs were given to eligible beneficiaries on Saturday and total 10,19,723 jabs have been given to residents so far. The results of 889 samples were still awaited from laboratories. — OC