Kids, some barely five years old, can be seen tucking at the elbows of motorcyclists or knocking at the windows of cars 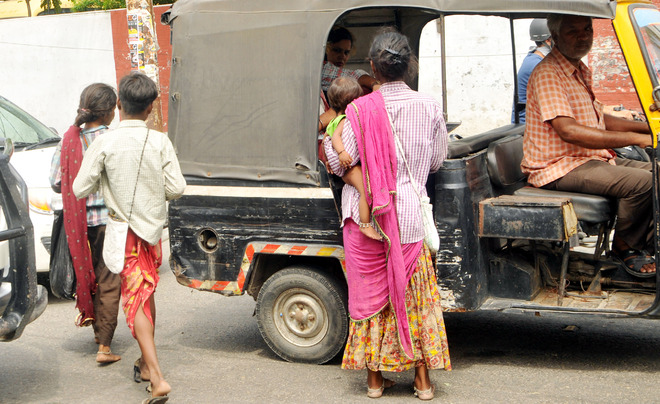 Though there are many stringent laws to curb the menace of begging and there is no dearth of guidelines for rehabilitation of such persons, a large number of children, including toddlers, can still be seen begging at various traffic intersections in the city. It also raises a serious question mark on the sincerity of the government.

Small children, some barely five years old, can be seen tucking at the elbows of motorcyclists or knocking at the windows of cars. Some of them carry small clothes and try to wipe the windscreen of the vehicles to attract the attention of passengers in a vehicle.

They move from vehicle to vehicle trying their luck. “Some of these children are so small that you cannot even see them if they are crossing the road by the front side bumper of the car. A careless driver might hit them when the traffic signals turn green,” said commuter Jagtar Singh. He said the government departments concerned should come forward and make efforts to identify who these children were.

In the past, the administration had once suggested to people to stop giving alms to them so as to curb the menace of begging. “The concern should be on to verify who their parents are. Are they drug addicts who are forcing their children to beg or they have a genuine problem. In both cases, it is the duty of the state and society to respond to their situation,” said a senior citizen Balkaran Singh.

Residents suggested that the district administration in association with religious organisations and NGOs should try to find a solution to the problem. They said as it was a holy city, small children begging at traffic signals are a blot on its reputation.

“Without education and proper guidance, what we expect from them when they grow up. People want to help them and that is the reason why they give them food or money. I myself try to give them food as they are not old enough to make purchases with the money. The money surely goes to their parent or the one who is controlling,” said Sunil Kumar, another resident.