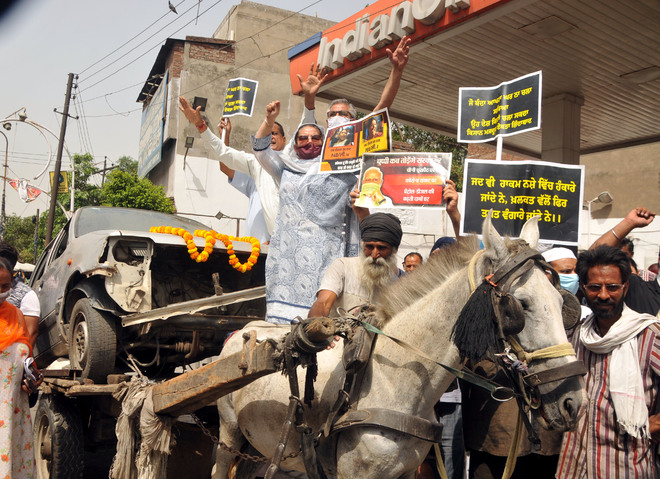 The District Congress Committee (DCC), headed by its president Jatinder Sonia, on Friday held a demonstration against the sky-rocketing fuel prices by burning a car in the Mahan Singh Gate area. Congress workers and leaders raised slogans against the Central Government led by Prime Minister Narendra Modi.

Speaking on the occasion, Sonia said the continuous rise in the prices of petrol and diesel had broken the back of the common man while the Central Government had failed to check its continuous upward trajectory. The rising fuel prices had a cascading effect on other items leading to a sharp rise in their prices.

Sonia torched a car, which was brought on the spot.

She said due to ill-conceived policies of the BJP-led Central Government, sources of income of people had dwindled while inflation was burning a hole in the common man’s pocket. It had become very difficult for people to run their houses. The unemployment had also increased manifold in the country. She said the autocratic policies were ruining the economic fabric of the country.

She said the government had become a puppet in the hands of big corporate houses. She said there was nothing to show for the last seven years of the BJP government at the Centre.

Police personnel in a spot

Setting a car on fire in protest has put Punjab police in a spot. While many said it could lead to a mishap, SHO Gurwinder Singh said he had brought the matter to the knowledge of their seniors and the matter was being looked into.

An anti-crime and animal protection association led by Dr Rohan Mehra has demanded the registration of an FIR against the Congress leader under the Prevention of Cruelty to Animals Act. He said they brought a car on a horse cart. Several persons, including Congress leader Sonia, were also standing on the cart. He said the horse was made to stand in the sweltering heat for hours. He said as per the law nobody could load more than 500 kg weight on the horse cart, but they not only loaded the car but also stood on it during the protest. Dr Mehra urged the Police Commissioner to register an FIR in this connection.