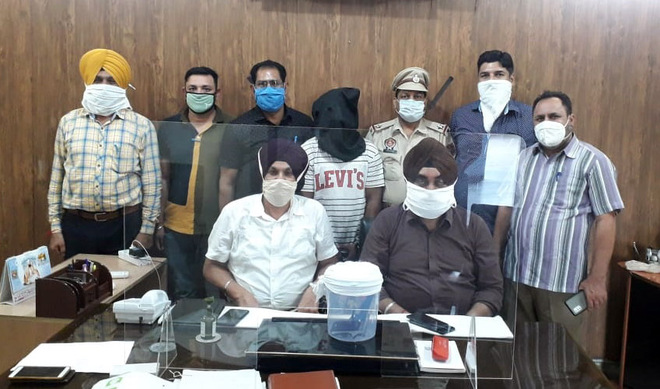 Gangster Sahil Singh (centre) in custody of CIA staff. A pistol was recovered from him in Amritsar on Saturday. Tribune Photo

The city police have arrested Sahil Singh, an accomplice of gangster Jujhar Singh, who is currently lodged in Hoshiarpur jail.

A resident of Gujjarpura area, Sahil was arrested in connection with murderous attack on Amrik Singh, alias Bitta, of New Amritsar area on August 8. Bitta was shot at by two unidentified persons. He sustained bullet injury on his leg. According to information, Bitta used to live on rent and was in home quarantine with his family. He had a dispute with the owners of his house.

Sukhwinder Randhawa, in charge CIA staff, said Jujhar had given Rs1 lakh to Sahil Singh for carrying out the attack on Bitta. Sahil was accompanied by Sunny of Salem Tabri area in Ludhiana. He is yet to be arrested. The police have recovered one pistol, a scooter and two mobile phones from him. Investigations revealed that they had procured the firearm from Uttar Pradesh for Rs60,000.

He said Sahil was the right hand of Jujhar and used to attack people on his direction. Besides Sunny, one more person was involved in the attack and he would be identified after his (Sunny’s) arrest.

Randhawa said Jujhar used to contact Sahil through WhatsApp call from jail for carrying out his nefarious activities. He said the accused also used to indulge in drug peddling. He said Jujhar would be brought on production warrant for further investigation.