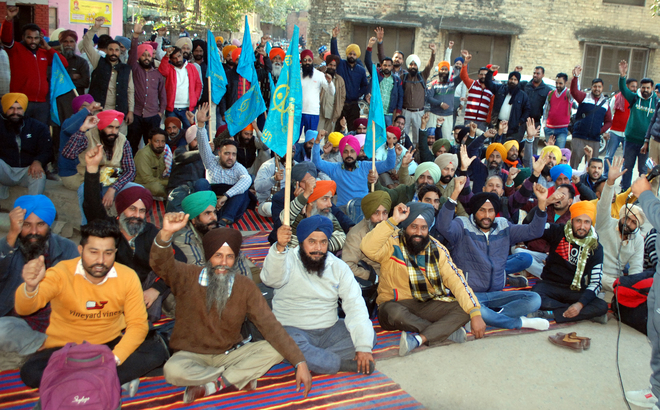 Punbus, PRTC contractual workers protest against the government for not accepting their demands. Vishal Kumar

The Punbus Contractual Workers’ Union went on an indefinite strike from Tuesday. The agitating employees held a protest outside interstate bus terminus and demanded regularisation of their jobs.

The union is demanding regularisation of contractual employees from long time and the consecutive state governments have failed to regularise our services after repeated assurances. Jodh Singh, Vice-president, Punbus Contractual Workers' Union

The protesters sought employment of ‘outsourced employees’ on a contract basis and resumption of services of those who were removed.

Jodh Singh, vice-president, Punbus Contractual Workers’ Union, said the union was demanding regularisation of contractual employees from long time and the consecutive state governments failed to regularise their services after repeated assurances. The union raised slogans against the state government while ruing the fact that no government official had approached them till now. Earlier, too they had held demonstration against the government by blocking the entry and exit points of the ISBT. The police had also registered a case against the union members in this connection.

Kuljit Singh of the union said there were around 7,500 contractual workers employed with Punbus and PRTC. He said of them, 400 have been employed in Amritsar only. Kewal Singh and Heera Singh were also present on the occasion.