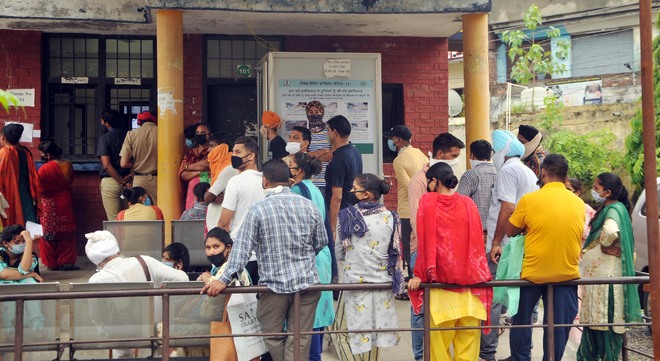 In yet another single day spike, the health authorities reported 113 positive cases of Covid-19 on Tuesday.

The district has also reported the death of a 67-year-old man due to the virus. The deceased has been identified as Suraj Narayan, a resident of Ghanupur Kale village. The health authorities stated said the patient admitted to Government Medical College had co-morbidities such as diabetes and hypertension.

Of the new cases reported on Tuesday, 57 are influenza like illness cases and 56 are contacts of positive patients.

Tarn Taran: The district reported two deaths due to the Covid-19 disease on Tuesday, taking the toll to 17. Sources in the Health Department said the victims had been identified as Manjit Singh (35) of Patti and Paramjit Singh (70) of Harike Pattan. The sources said there were a total of 151 active cases under treatment in the district, out of these 35 were under treatment on hospitals of other districts.