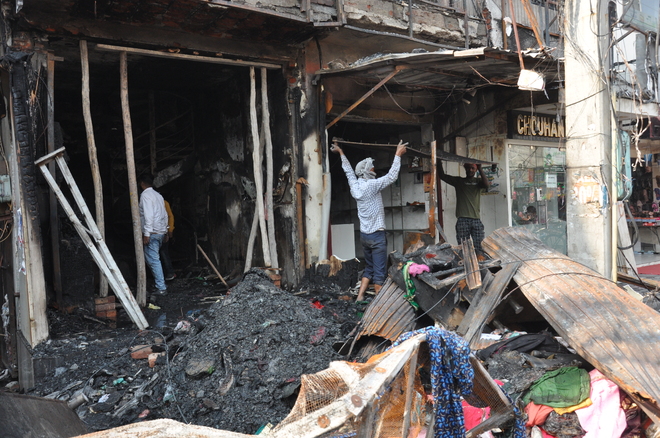 A readymade garment shop perished in fire in Putlighar.

At a time when residents were busy celebrating Diwali, two shops, including a readymade garment shop in Putlighar was gutted. Even an adjoining shop and goods worth lakhs were destroyed in the incident.

The eyewitnesses immediately informed the Fire Department. Around 10 fire engines and 40 firefighters were pressed into service to douse the flames. It took around three hours to extinguish the flames.

Cops also reached the spot and said the matter would be probed to ascertain the actual reason behind the incident.

The eyewitnesses said the fire suddenly erupted at Sai Creations. Within no time, it engulfed the first floor and also spread to the adjoining shop. As shutters of the shops were down, the firefighters had to break it gain entry in the shops.

Fire officials said due to the presence of garments, cardboards and polythene, the fire spread rapidly. The city witnessed 19 incidents of fire on the night of Diwali. No loss of life was reported.

Assistant Divisional Fire Officer Lovepreet Singh said we received calls till 3 am in the morning. He said firefighters were on their toes throughout the night. In majority of the cases, crackers were the main reason behind the incidents.