LUDHIANA: The city police got another layer of security with the induction of a bullet-proof truck. 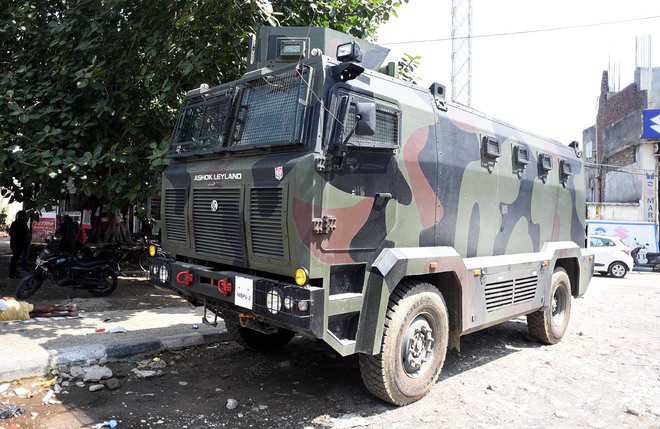 A bullet-proof truck parked near the Durga Mata temple in Ludhiana on Wednesday. Inderjeet Verma

The city police got another layer of security with the induction of a bullet-proof truck. The truck, which can prevent cops from being hit by bullets, stones or heavy weapons, has been stationed near the Jagraon bridge outside the Durga Mata temple.

Additional Deputy Commissioner of Police (Headquarters and Security) Deepak Pareek, while talking to The Tribune, said the Ludhiana police got this truck for security purpose around a week ago.

“We have deployed the bullet-proof truck outside the Durga Mata temple where it will remain stationed for some days. We will station it at strategic places in the coming days to avoid any untoward incident,” Pareek said.

Pareek said since Janamashtami was also approaching, enough security measures were being taken to keep a tab on anti-social elements.

“We reviewed security arrangements at various temples here. PCR and other teams have been told to conduct routine patrolling outside and in the surroundings of the temples ahead of the Janamashtami celebrations in the city,” the ADCP said.

Sources said the police had also told the temple authorities to install CCTV cameras in their premises to keep a watch on anti-social elements. But some of the temples are yet to follow the orders. The sources said policemen would be deployed in civvies outside the temples to check criminal activities.