Around Diwali, the Air Quality Index (AQI) showed the worst readings of the season in many cities in North India. 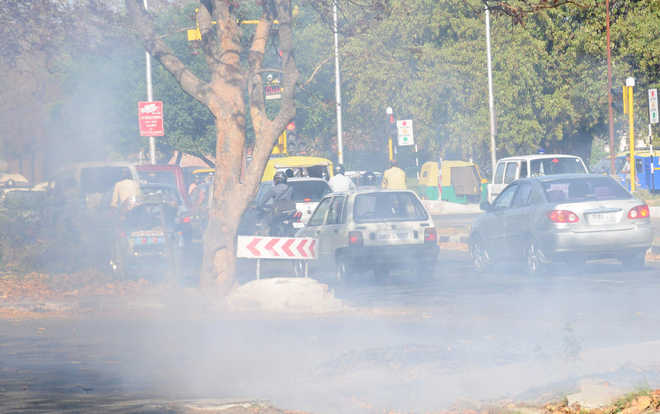 Turning off the car engine as you wait at a red light for over 30 seconds is the least we can do for the environment.

Around Diwali, the Air Quality Index (AQI) showed the worst readings of the season in many cities in North India. Delhi, Chandigarh, Hissar and Ludhiana were the worst. The next three-four months could be the worst of the year. Temperature inversion is the reason. The cold air is heavy and hugs the ground. Your car’s exhaust fumes or smoke from stubble burning are held down by the cold air and are unable to rise and escape into the atmosphere. There is carbon monoxide, sulphur dioxide and nitrogen dioxide, all highly poisonous. This is what you will be breathing as you drive around the city.

You, as an individual, are the only one who can do something about it. Adopt Green Good Deed and see how it works magic. All you have to do is switch off your engine as you wait at a red light for over 30 seconds. The temperature is ideal to just enjoy the sun and wait patiently. With about 7-9 seconds in hand, fire up your engine, put the car into gear, release the handbrake and move off. No honking!

At Chandigarh’s busy roundabouts on Madhya Marg and Himalaya Marg, Sarovar Path and Sukhna Path you will see hundreds of cars waiting for a green light, engines idling and all spewing out noxious fumes. With engines switched off, it will make a difference to the air. This will be your most important personal contribution in saving the planet. And you really don’t have to do very much.

Sample this: About 5 lakh vehicles enter Chandigarh daily. By switching off engines, let us say, each car saves one litre a day. That is 5 lakh litres saved. If every car in India did this, billions of litres would be saved in a day. For sure it will make a difference to the air quality and our fuel import bill.

Madhya Marg is the most highly traffic infested road in the city. Avoid it. It connects to the Tri City and everything beyond in Haryana, Himachal and Punjab.

Having the maximum number of cars, it has the highest level of pollution. The grid system of roads in Chandigarh will allow you to find a less congested route without any trouble.

This will be great help. It will cut down traffic on Madhya Marg, resulting in less pollution. On the alternate route, you won’t be ingesting the mucky air. Your travel time may be lesser. Really a win-win situation!

Chandigarh has 878 vehicles per 1,000 people. The highest density of vehicles in the country. Think about forming a carpool. You will need to make some changes in your lifestyle. Think of it as a small sacrifice to save Mother Nature and the future of your children. So do it!

Another very easy, inexpensive and convenient mode of travel is the taxi service. It is very good. I know as I go for it often. Taxis reduce the number of cars on road and reduce pollution. All these cars run on natural gas. Again, a win-win situation! So go for it!

The Met Department see a long and cold winter with fog and mist. Be prepared for it. Your heater, defroster, wipers and Pollution Under Control certificate should all be in order.