MANDI: With the Beas in spate, Pandoh and Larji dam authorities opened floodgates to release water on Sunday. 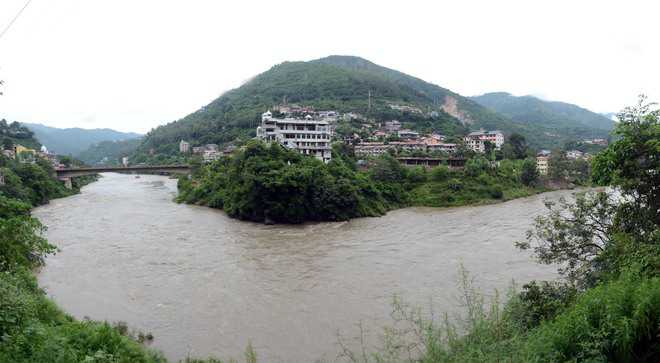 Tourists have been advised to stay away from the Beas because of heavy rain warning by the Met Department. Photo: Jai Kumar

With the Beas in spate, Pandoh and Larji dam authorities opened floodgates to release water on Sunday. In view of public safety the district administration has asked the people and tourists to stay away from banks of the Beas during rainy season as water flow is high and may increase further.

Deputy Commissioner Mandi Rugved Thakur said that due to heavy downpour warning in the coming days and release of water people visiting the district have been advised to stay away from the river.

Incidents have been  reported in the past when people lost their lives in Beas while clicking selfies or entertaining themselves close the Beas. River rafting has already been banned in Kullu district in view of public safety.

A driver was killed in road accident, when a tipper (HP32A-3235) he was driving, plunged into the Beas on the Chandigarh-Manali national highway, a few kilometers away from Mandi bus stand toward Kullu side on Sunday.

The deceased was identified as Hansraj (31), a native of Dhalvahan village, in Mandi district.

The police and locals rescued the victim from the accident spot and rushed him to Zonal Hospital, Mandi, where he succumbed to his injuries.

The Beas is on the spate these days due to release of water from the Pandoh and Larji dams.

The police traced the vehicle in the afternoon. Efforts were under way to pull it out.

Hitesh Lakhan Pal, DSP, Mandi, said rash driving may have led to the accident. At the time of incident, the victim was alone in the vehicle. A case has been registered and a probe is on.