SHIMLA: Dodging police in the tiny hill state of Himachal would not be an easy task as CCTV cameras are acting as Third Eye and keeping constant vigil on criminals and anti social elements. 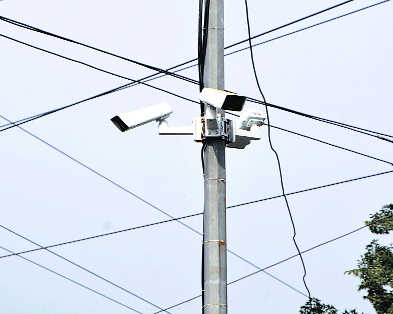 Dodging police in the tiny hill state of Himachal would not be an easy task as CCTV cameras are acting as Third Eye and keeping constant vigil on criminals and anti social elements.

The entire state is under surveillance with the police department setting up a huge network of 28,656 CCTV cameras in the past one year to keep a watch on criminals and anti-social elements, who would no longer have a free run after committing crime

The CCTV cameras have been installed by persuading business establishments, hotels, industries, training institutes, shops and other institutions to install these to keep a watch on the activities by capturing movement in and around the establishment. The maximum number of cameras is operational in Baddi police district, comprising the Baddi-Barotiwala-Nalagarh industrial hub bordering Punjab and Haryana.

Five cameras each have been installed in 129 police station, barring cyber crime, vigilance and CID police stations, with four cameras inside the police station and one outside. Besides installation of new cameras, a large number of faulty CCTV cameras are being repaired.

“It has been made mandatory for the Sub Divisional police officers to certify every month that all the CCTVs in their respective jurisdiction are functional”, said DGP S R Mardi adding that the process of expanding the network would continue.

The evidence provided by the CCTV cameras come handy during police investigation. Camera footage has been crucial in solving over 70 per cent of the blind cases in the state, he added.

Police sources revealed that the movements pertaining to the 19-year-old girl, who had alleged that she was abducted and raped near Dhalli Tunnel in the outskirts of the state capital on April 28, were captured in these CCTV cameras, enabling the police to cross check the allegations leveled by the victim in the FIR.

It was only after the girl was shown the video clips in which she was walking on the three-km stretch from Dhalli Tunnel to Lower Cemetery that she reportedly backtracked from the allegations made in the complaint while recording her statement before the magistrate.

Besides CCTV cameras, 198 automatic number plate recorder (ANPR) cameras have been installed at the 99 inter-state and sensitive locations for recording the incoming and outgoing movement of the vehicles which is monitored at the police headquarters and respective police stations.

The respective SHOs, DSPs and SPs can also keep tabs on the movement of vehicles on their mobile and in case of crime it would be convenient to ascertain that the vehicle in question crossed the place at that particular time when the incident took place.

Moreover, for effective enforcement of Motor Vehicle Act, 526 body cameras have been allotted to the traffic police which helps in recording evidence and procurement of 500 more cameras is underway.