Concrete mess in McLeodganj a cause for concern

A two-day workshop on Disaster Management to mark the 1905 Kangra earthquake anniversary was held at Government Postgraduate College, Dharamsala. 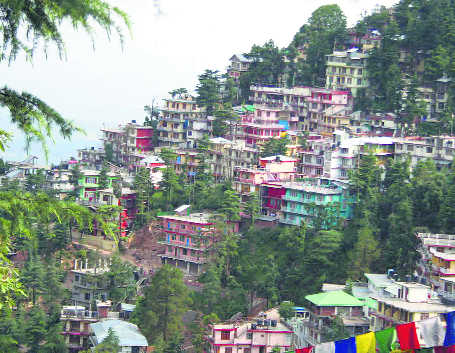 Experts expressed concerns over the large numbers of illegal constructions coming up in McLeodganj due to the seismic vulnerability of the area.

Prof Ambrish Kumar Mahajan, the organising secretary of the workshop, said the main focus was to bring all scientists and academicians and stakeholders on one platform. Over 500 representatives from PWD, IPH, Health, Town and Country Planning, Smart City officials and Army cantonment Yol, National Disaster Relief Force (NDRF), NGOs, Mountaineering Institute and students, delegates from far-flung areas including Pangi and Reckong Peo participated in the workshop, he said.

Prof Mahajan gave the detailed account of seismic hazard status of Kangra valley. He stressed on seismic micro-zoning of Kangra to illustrate as to which areas were comparatively more prone to seismic hazard. The vulnerability status of each region was specified in his study. Most of the presentation focused on disaster resilient efforts. There was big concern on haphazard construction from all corners. Experts pointed out that McLedoganj needs to be revisited for its vulnerability status. The building design and how to construct earthquake-resistant building in Himachal Pradesh was also presented. The applications of Information Communications and Technology (ICT) in disaster management were stressed in today’s framework.