Keep an eye on Afghanistan

National attention is now on the forthcoming elections. 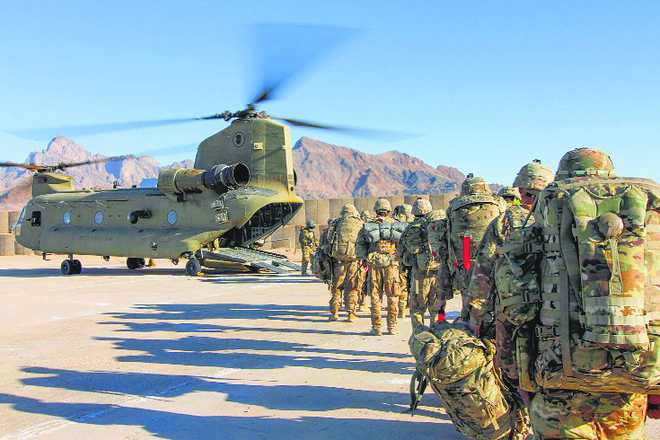 NEXT IN LINE: Iran and Russia are eager to fill the vacuum created by the US pullout.

National attention is now on the forthcoming elections. This is accompanied by national determination to respond strongly to the Pulwama outrage. A related foreign policy issue that requires careful monitoring is the upcoming US withdrawal from Afghanistan. This will inevitably lead to increasing Taliban control of Afghanistan, especially in Pashtun-dominated areas, bordering Pakistan. Pakistani terrorist groups like Harkat-ul-Mujahideen (renamed later as Jaish-e-Mohammed) established training camps in southern Afghanistan, when the ISI-backed Taliban ruled Afghanistan till November 2001. The Taliban colluded with the ISI during the hijacking of IC-814 to secure the release of three terrorists, including Jaish leader Masood Azhar, from Indian jails.

The proposed withdrawal will be seen as the failure of yet another US misadventure abroad. These serious misadventures in the past included a debacle in Vietnam, Lebanon, Somalia and Iraq. After 17 years of fighting in Afghanistan, the US-backed government today controls just over half the country, with the remaining areas either contested, or controlled by the Taliban. Roughly, 40 security personnel are killed every day, with over 10,000 civilian casualties in 2018. The Taliban have attacked major urban centres. In these circumstances, the Ashraf Ghani-led government is fearful of being ditched by the Trump administration, with whom differences have developed on American insistence to postpone the next presidential elections.

While President Trump is not popular in any major world capital, his desire to avoid any foreign military involvement enjoys widespread support domestically. The unseemly hurry with which Trump’s chief negotiator Zalmay Khalilzad is seeking to carry forward talks with the Taliban, facilitating an early withdrawal, is evident. Gulf countries like the UAE, Saudi Arabia and their rival Qatar are helping the US endeavour to execute a face-saving withdrawal from Afghanistan. The Gulf states are using a carrot-and-stick approach to compel Pakistan to back the American effort. With Pakistani foreign exchange reserves reaching a new low of $6 billion, the UAE and Saudi Arabia are providing Pakistan $12 billion to keep its economy afloat.

While Pakistan may appear elated at the prospect of US withdrawal, expecting a Taliban takeover thereafter, there are now several imponderables, with Iran and Russia appearing set to force developments in a somewhat different direction. The Iranians appear to have persuaded the Taliban that Teheran can play a crucial role in making peace between the Taliban and Tajik, Uzbek, Turkmen and Shia Hazara groups, across the Iran-Afghanistan border. The Taliban were at war with these groups known as the Northern Alliance, when last in power. The conference on Afghan peace in Moscow was attended by prominent Afghan leaders, former President Hamid Karzai (no great friend of the US), Hanif Atmar, set to contest the next presidential elections, and Tajik strongman Atta Mohammed Noor, together with members of the Taliban. With Mullah Baradar, who was jailed for years by Pakistan, now playing a leading role in the Taliban, Pakistan cannot expect that a Taliban-backed government will yield to diktats from Rawalpindi

Russia and Iran appear to be outmanoeuvring the US in engaging the Taliban. There is, paradoxically, a measure of complementarity in the aims of the US and Russia, when it comes to disregarding or marginalising the role of the Ghani government in fashioning a new architecture for governing Afghanistan. Moves in this direction could, however, lead to a split in the Taliban, especially if the largely Pakistan-based Haqqani network remains a predominantly ISI proxy.  Equally, excluding representatives of the Ghani government from talks with the Taliban, as both the US and Russia have done, is a recipe for continuing internal conflict.

The Taliban have never formally recognised the Durand Line as the international border with Pakistan. The situation along the border is further complicated by the emergence of a strong sense of Pashtun resentment and sub-nationalism across the line. This alienation arises from the brutal operations in tribal areas under Pakistan army’s Zarb-e-Azb operations. These sentiments are symbolised by the emergence of the Pakhtun Tahaffuz Movement (PTM). Complicating matters further for Pakistan, an estimated 4,000 armed members of the Tehriq-e-Taliban Pakistan, once ISI protegees, are now spread across Afghanistan. Their desire for revenge against the brutalities of the Pakistan army cannot be underestimated.

India will have to monitor these developments. The Taliban have given indications that they understand the importance of India’s role, especially in building the Chahbahar Port and its economic assistance to Afghanistan. There are, however, several challenges for India, including the possibility of the Taliban returning to their medieval practices. But these issues can be handled with astute diplomacy and readiness to continue with economic assistance, which has won us many friends in Afghanistan.

Amidst these developments, Iran announced on February 12 that 28 of its soldiers were killed in a blast near the Iran-Pakistan border. The Iranians vowed retribution. The Iran ambassador in Islamabad was summoned the next day for a ‘strong protest’ from Pakistan, claiming that six Pakistani soldiers were killed along the border. All this happened even as hectic preparations were underway in Pakistan to welcome the Saudi Arabia Crown Prince. Pakistan appears insistent on promoting terrorism and provoking three of its neighbours — Iran, Afghanistan and India.