More than a comic relief! 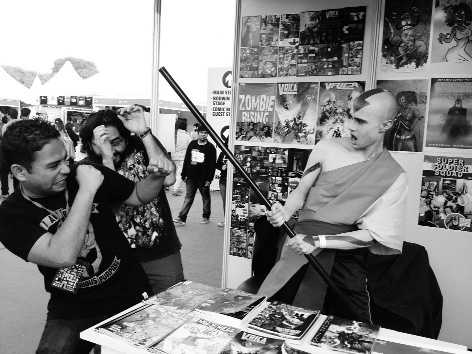 Has the new breed of Indians met the challenge of creating comic characters — born and bred on the Indian soil, shaped by local situations and fired by the very desi imagination? Highly talented content creators — writers and illustrators — are going through years of heartache to find a footing, quitting plush jobs to replicate the Indian-ness earned by films, music and fashion in comic journals. Theirs is a class, one could easily bracket as crazy, for trying to make a dent in the mighty DC and Marvel creations that enjoy formidable outreach and long histories.

“At least we are making a noise,” says Vivek Goel of Holy Cow Comics, who struggled for three years without success, to be followed by a number of coincidences that paved the way for the popularity of his strangely named comic series Ravanayan. It is a story of Ramayana told from the perspective of Ravana that invited threats from Hindu radicals such as the VHP. It received free publicity too, as Mani Ratnam’s film ‘Ravana’ and later Shah Rukh Khan starrer ‘Ra.One’ were released along with his series. The 8-series comic has become the Dev Anand of comic industry that no one can ignore.

A desi answer to Dr Strange followed in Aghori series. “My heroes don’t come from big cities. They are shaped by small towns. The hero of my new series is from Arunachal Pradesh, with such cultural diversity. Do we need just one superhero?” The plurality defines their popularity.

Call it a noise or a need to tap opportunity; trends are showing signs of change. The Indian content is adapted by big names in global comic industry. Renowned comic book writer Grant Morrison and artist Mukesh Singh have adapted the epic Mahabharata to create a graphic novel in one of their latest ventures to be released in America, called 18 days, based on the life of Draupadi. Launched only last month, Mighty Girl from India, created by Stan Lee and Sharad Devarajan, Leela (as her alter ego Mighty Girl) is hoping to be the kind of girl little girls look up to. She is the best friend of one of India’s most popular superhero characters, Chakra the Invincible. Stan Lee is the famous name behind such superhero franchises as SpiderMan, X-Men, and The Avengers. The new trends also pave the way for women characters in the male pantheon of superheroes.

At New York chapter of Comic Con, this year, there was a session on Indian comics, says Akshay Dhar of Meta Desi Comics. He addressed the session along with Jatin Varma, founder, Comic Con India. Though, it’s not easy for the new creators to break the archetypes established by the global giants.

Regional comic industry is not challenged by the presence of big players. Their characters have a loyal following. “People like us who are creating content in English face the challenge of getting the urban, English-speaking reader shift from DC and Marvel to indigenous characters,” says Dhar. His series Retrograde earned him enough money and popularity and also the publishing rights to experiment on a Mad Max kind of sci-fi series based in a small Indian hill station. He too has dared –Holy Hell -- a comedy series that parodies several references to Indian society.

“We are a team of energetic, witty writers and content creators, we dare to get around political incorrectness.” It’s a highly popular series reproduced in anthologies and three volumes. His recent comic book Ground Zero was received with enthusiasm at the recently held Comic Con in Delhi.

Aniruddho Chakraborty of ICBM Comics that published VRICA, Zombie Rising and Damned says: “If the new independent wave of comics is any indication, yes, there is a market for Indian superheroes.” he is confident. These comics have not even taken into consideration another set of popular comic series based on Indian mythological characters.

“Comic Cons has created a symbiotic relationship with upcoming creators. It has its own dynamics and pressure. The fact that comic is attached to this business venture has made Indian comic industry stronger and healthier,” says Vivek Goel.