LEEDS:An extraordinary 135 not out from Ben Stokes earned England an exciting one-wicket victory in the third Ashes Test to level the series against Australia at 1-1, with the home side chasing down a record target of 359 in a dramatic fashion. 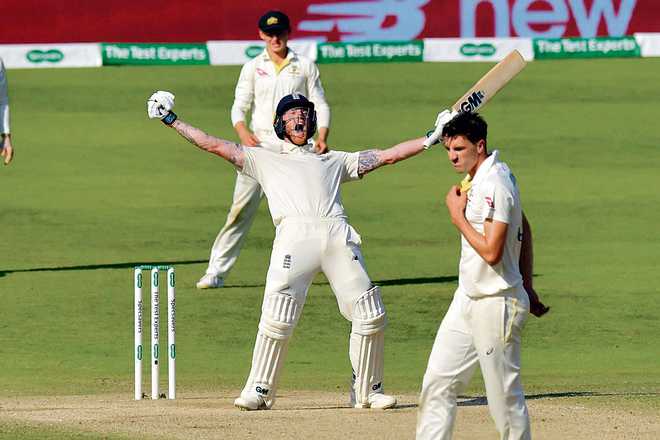 Ben Stokes celebrates after hitting the winning runs on the fourth Day 4 . AFP

An extraordinary 135 not out from Ben Stokes earned England an exciting one-wicket victory in the third Ashes Test to level the series against Australia at 1-1, with the home side chasing down a record target of 359 in a dramatic fashion.

Starting the day looking to prevent Australia from retaining the Ashes, England were 286/9, still 73 runs short of their target. The tourists needed only the win to ensure a series defeat was impossible and the urn would stay in their possession.

However, with one wicket left, England World Cup hero Stokes knew everything depended on him and he smashed a remarkable eight sixes to all corners of the ground to get England within touching distance of their highest-ever second-innings total to win a Test match.

Steve Smith is hoping for a return for the fourth Ashes Test, after taking part in a light net session for the first time since suffering concussion. According to a report, Smith faced throwdowns from assistant coaches Graeme Hick and Sridharan Sriram and looked in his elements after he was hit by a fast Jofra Archer bouncer which ruled him out of the third Test.

Smith is also likely to play in the three-day tour match against Derbyshire at Derby starting on Thursday. — Agencies

76* The partnership between Stokes and Leach, the 2nd-higest for the 10th wicket in a successful chase in the fourth innings. Leach contributed 1 run to the partnership

78* Is the record 10th wicket partnership in a successful 4th innings chase, between Kusal Perera and Vishwa Fermando vs South Africa at Durban in February 2019

143 Runs and 4 wickets for Ben Stokes in the match

67 England’s first-innings total. There are only 3 instances of teams scoring fewer runs in an innings, in a Test they ended up winning, all in  1880s

2 This is only the second successful 350-plus 4th innings chase in England, after Australia chased 404 at Leeds in 1948