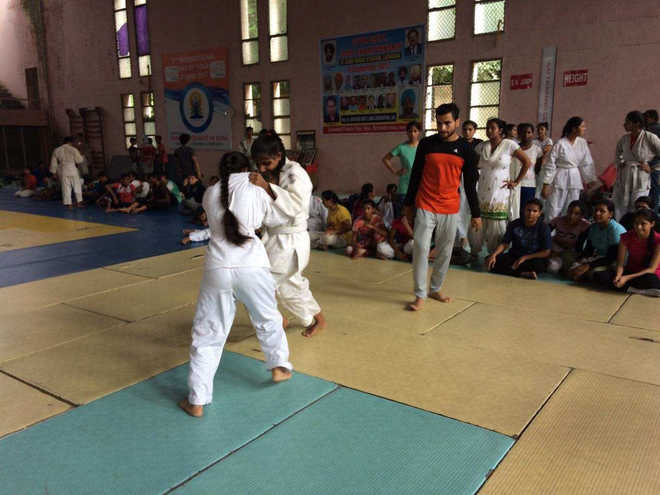 Players in action during the games organised under the Tandarust Punjab Mission. Tribune photos

Competitions in various sports disciplines are being conducted by the Punjab Sports Department at various venues across the state to encourage the youth. The local office of the department also organised games at Guru Nanak Stadium in the city and various sub-centres throughout the district.

In a handball match (boys U-14), Government School, PAU, warded off strong challenge from International Public School, Sandhu Nagar, before wrapping up the match 13-10.

Players and coaches took part in a yoga session at the sub-centre, Sri Bhaini Sahib, on the Ludhiana-Chandigarh road wherein they were told that certain yogasanas were helpful in performing well under stressful moments.

Badminton matches in the boys’ and girls’ sections (U-10 and14) were held at the Sri Bhaini Sahib centre. In the boy’s section (U-10), Veer Singh came out victorious while Atma Singh secured the second position and in the girls’ U-10 group, Simran beat Gurbachan Kaur to romp home triumphant.

In the boys’ U-14 category, Sham Singh beat Balwant Singh, whereas in the girls’ section, Gurleen Kaur defeated Navdeep Kaur to emerge winner.

The multipurpose indoor hall of Guru Nanak Stadium was the venue for judo matches for girls U-17 section. In the below 36-kg group, Diksha Bains outperformed Simran to bag the top position while Isha finished at the third place.

In the below 40-kg section, Ishita romped home winner while Manpreet Kaur and Namrata finished at the second and third spot, respectively.

Radhika came out victorious in the below 44-kg category and Himanshi secured the second position while Kanan finished at the third place.

Besides, weightlifting and wrestling competitions in the boys’ section were held at the Jarg sub-centre and Sant Sardul Singh Memorial Wrestling Akhara, respectively.