DERA BABA NANAK: Chief Minister Capt Amarinder Singh will be attending the PM’s gathering being organised by the SAD and the SGPC at the BSF post of Shikhaar Masiahan, 8km away from the corridor. 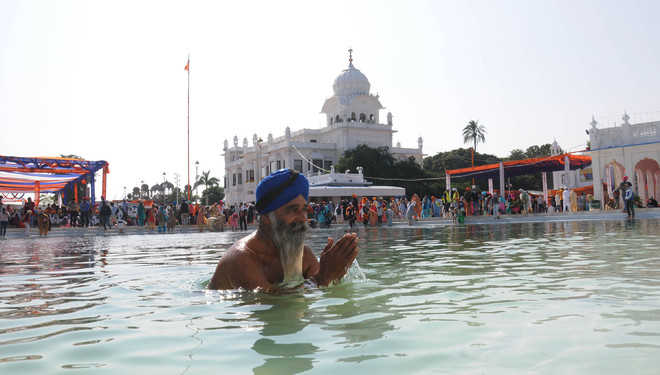 A devotee takes a dip in the sarovar of Gurdwara Ber Sahibin Sultanpur Lodhi on Friday. Tribune photo: Malkiat Singh

Chief Minister Capt Amarinder Singh will be attending the PM’s gathering being organised by the SAD and the SGPC at the BSF post of Shikhaar Masiahan, 8km away from the corridor.

The PM, after landing at Shikhaar, will take part in rituals being organised by the SGPC. Later, he will address a public meeting before proceeding to the corridor for its opening. For the last one week, Akali leaders Bikram Singh Majithia, Daljeet Singh Cheema and Ravi Karan Kahlon have been supervising the preparations.

The state and Central governments worked at variance with each other following which two stages were set up before better sense prevailed today. The state government has now cancelled its proposed rally.

On the eve of the opening, the lack of a centralised command structure means pandemonium prevails everywhere. The signs were pretty ominous yesterday. An hour-long shower rendered the Rs 4.2 crore tent city, established near the passage, redundant. This development forced the state to scout for different venues to accommodate the kin of devotees’ crossing over to Kartarpur. The organisers are working on a 1:3 ratio, which means that for every pilgrim who crosses over the border, three will stay back. Glitches and gaps in the infrastructure have sparked off verbal skirmishes between Congress and SAD leaders.

“The tent city was a disaster waiting to happen. The state government erred by setting it up in a low-lying area in the first place. Rainwater was bound to accumulate,” said a senior Akali leader.

To this, Cabinet Minister and local MLA Sukhjinder Singh Randhawa retorted, “The Akalis should know that the entire city of Dera Baba Nanak is located in a low-lying area. We know how to do our job and the Akalis need not tell us what to do.”

The Centre is sponsoring the visit of 62 NRIs who have been lodged in a five-star hotel in Amritsar. They will be brought in a bus to the corridor and later, travel back to their hotel in the evening. Prominent Dubai businessman and philanthropist SPS Oberoi is among them.

Meanwhile, the BSF is keeping a hawk’s eye on the movements of the Pakistan Rangers across the border in the vicinity of the Kartarpur shrine through high-resolution telescopes. It has intensified the activity ever since reports surfaced that the area was hosting terror camps.

The 8-km-long route to be taken by the PM from the helipad till the corridor has been sanitised and subsequently cordoned off. Earlier, he was to land near the corridor, but his security did not give its consent because the proposed helipad was considered to be perilously close to the IB. The corridor building is barely 500 yards away from the wire fencing.