NEW DELHI:Defending champions Andamlak Belihu and Tsehay Gemechu produced their personal best to retain the men’s and women’s titles, respectively, at the 15th Delhi Half Marathon. 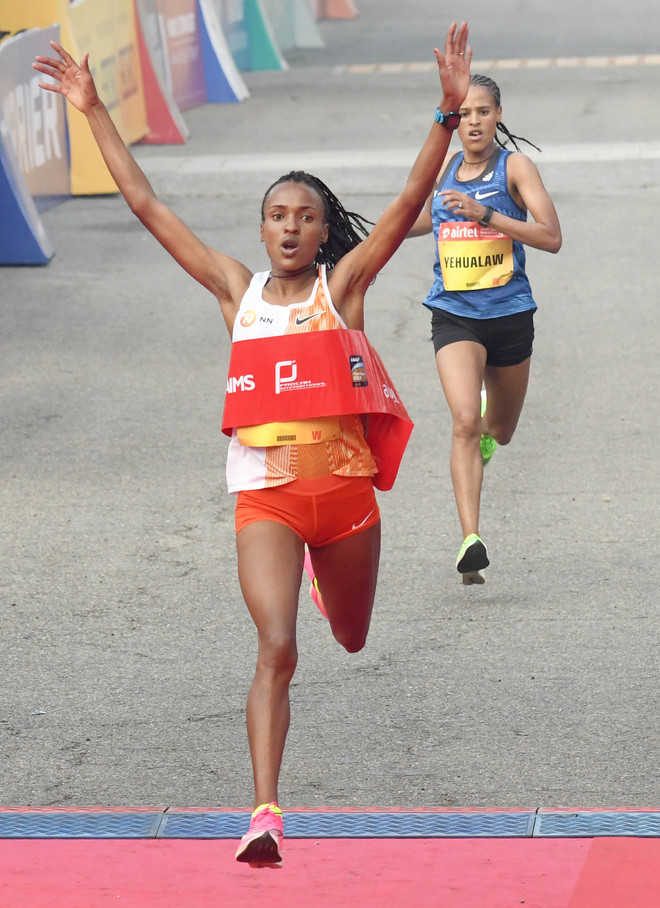 Defending champions Andamlak Belihu and Tsehay Gemechu produced their personal best to retain the men’s and women’s titles, respectively, at the 15th Delhi Half Marathon. Belihu’s timing of 59:10 was better than the 59.18 that he had clocked to win the title last year but it was four seconds short of the course record set by Guye Adola (59.06) in 2014. Gemechu, on the other hand, smashed the course record by producing a personal best of 66:00. Belihu finished ahead of compatriot Solomon Berihu, who came up with a time of 59:17 on debut, while Kenya’s Kibiwott Kandie signed off third with a timing of 59:33. Belihu and Berihu had a thrilling head-to-head battle over the final few kilometres.

At the 18km mark, Belihu looked in trouble for several minutes but recovered his poise and reeled in his rival with little more than a kilometre remaining before pulling away for victory.

“At about 18km I started to suffer some back pain that possibly cost me the course record. I’m a bit disappointed that I missed out on the course record again but I got a personal best so I cannot complain too much,” said Belihu.  “This race has put the frustration of finishing fifth at the World Championships (in the 10,000m in Doha two weeks ago) behind me,” added the 20-year-old, who wants to come back in 2020 to attack the course record and try to become the first to win a hat-trick of Delhi titles.

Ethiopia also dominated the women’s race with their long-distance runners grabbing the top-3 spots at the prestigious IAAF Gold Label Race here. The 21-year-old Gemechu not only pocketed a cheque of $27,000 for the top position but also grabbed a course record bonus of $10,000. Yelamzerf Yehualaw (66:01) finished just one second behind Gemeche for the second place, while Zeineba Yimer clocked 66:57 to take the third spot, the same position she had finished in 2018.

Gemechu, who had scored a personal best of 66:50 to set a course record last year, said: “I broke the course record and I am happy that I could achieve it. I was tired after Doha. But I wanted to come here and fight for the course record. I knew I was mentally strong.”