Unsafe buildings a threat to residents

BATHINDA: Following incessant rain in the past two days, the threat of mishaps due to collapse of unsafe buildings looms large in the city. 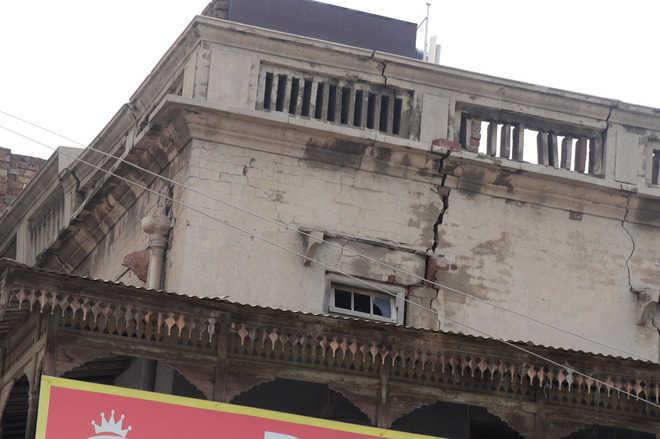 The MC had conducted a survey and identified 42 unsafe buildings in the city last year. Vijay Kumar

Following incessant rain in the past two days, the threat of mishaps due to collapse of unsafe buildings looms large in the city.

Reportedly, the MC had conducted a survey and identified 42 unsafe buildings in the city last year, but no concrete step was taken to ensure eviction of residents or commercial property owners from these buildings. However, the civic body has demolished two unsafe buildings here in one year.

On Thursday, a team of MC officials, including building inspectors, inspected unsafe buildings. “The inspection was done in the wake of heavy rain in the past few days. The objective was to see if there was any further damage to these buildings,” said Inderjit Singh, Assistant Town Planner of the MC’s building branch.

The Assistant Town Planner said, “The building branch of the MC had submitted a list of unsafe buildings to the B&R wing, but the latter has not give any response on the matter so far. It can only point out technical faults in these buildings so that further action can be initiated.”

Sources in the MC said efforts were afoot to convince residents or owners of commercial properties, who currently own these unsafe buildings, to evict them and accommodate under the Pradhan Mantri Awas Yojana (PMAY).

A number of incidents of building collapse have been reported especially during the rainy season in the country in which many people lost their lives.

A majority of these buildings are situated in the old city area near Quila Mubarak, Sirki Bazaar, Sadar Bazaar, Udham Singh Nagar and Mall Godam road.

Ravinder Jaura, XEN, MC, said, “The MC had demolished two unsafe buildings near the railway station area in one year. Evicting residents or traders operating from these unsafe buildings is a tough task and since a majority of the owners of these properties have stay orders from the court, the matter is sub judice now. We can initiate action against unsafe buildings till the final verdict of the court comes. Residents living in these houses for decades are not willing to vacate them.”

Mayor Balwant Rai Nath could not be contacted despite repeated attempts.