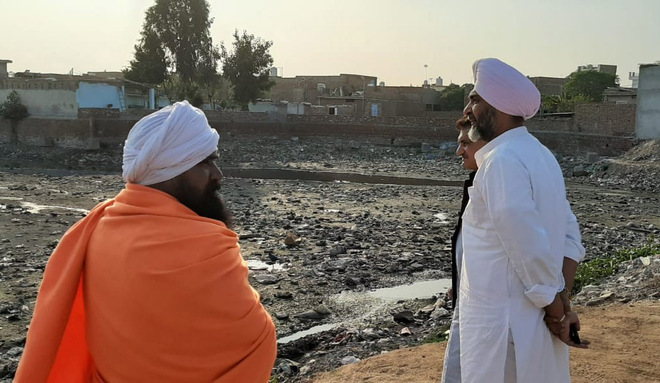 Finance Minister Manpreet Singh Badal on Sunday visited the Sanjay Nagar pond to review the ongoing desilting work to increase its capacity. Manpreet directed the MC Commissioner, Bikramjit Singh Shergill, to get the work completed at the earliest.

Manpreet Badal said a walking track would be built on the Sanjay Nagar pond for residents of trans-railway line area. Manpreet claimed that residents won’t be deprived of basic amenities.

It is pertinent to mention that the objective behind desilting Sanjay Nagar pond is to increase the capacity of the pond so that residents can get relief from the problem of waterlogging in the city. After a spell of rain, the city faces witnesses waterlogging.

Earlier, rainwater was made to flow into the ponds and later, it was released into the sullage carrier. But with its capacity shrinking, the rainwater was also channelised into the sullage carrier, leading to breaches at many times in the past. Providing relief to residents from waterlogging was a major point in the local manifesto released by the Finance Minister, before the Assembly elections. He had instructed MC officials to find a permanent solution to the problem.