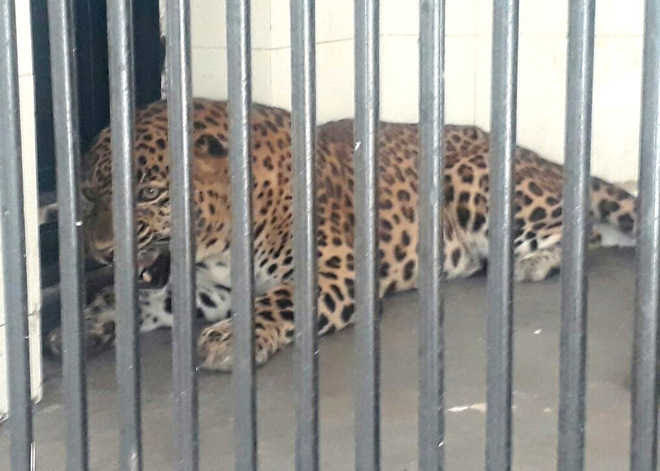 A leopard at the Bir Talab Zoo in Bathinda. File photo

In the absence of a permanent veterinary doctor at Bir Talab Zoo in Bathinda, the project to bring a female leopard and other rare species of animals is lying in cold storage for the past over three years.

The zoo was to get a female leopard from Chhatbir Zoo near Chandigarh last year but approval for it could not be granted owing to absence of a permanent doctor at the hospital, situated inside the Bathinda zoo. Earlier, the authorities had claimed that leopard could not be

brought in the wake of restrictions imposed during the Covid pandemic.

There are three male leopards in the zoo. The authorities had written to the state Wildlife Department to provide a female leopard and one pair each of painted storks and hog deers but there is no headway in the project.

Sources said there was a fully-equipped hospital inside the zoo premises but it was lying locked for the past many years. Whenever there is any medical emergency, the zoo authorities take assistance of veterinary doctors from the city, who have to travel long distances to reach the zoo and at times, animals requiring immediate medical intervention have to suffer.

Even during breeding of animals, the zoo authorities face a lot of difficulty.

Divisional Forest Officer, Bathinda, Swaran Singh said, “We were to receive a female leopard from Chhatbir Zoo but have not got it yet. We have written to the higher authorities regarding the permanent appointment of a veterinary doctor but there is no progress on that either.”