Cause of death unknown, samples sent to Jalandhar laboratory for testing 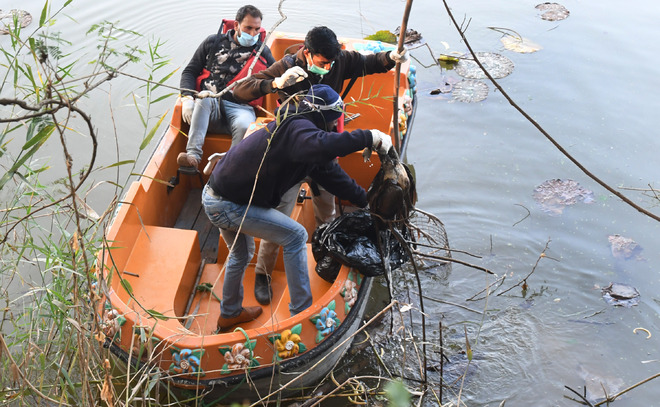 Four more birds have been found dead at the regulator end of Sukhna Lake here today.

During patrolling of forest areas, Sukhna Lake and other water bodies of the city, a team of the Department of Forest and Wildlife, UT, found a common coot dead on Tuesday evening.

During surveillance, four more birds of other species, including a common crow, were found dead at the regulator end of the lake today.

The reason of their death has not been ascertained so far. However, the samples of the dead birds have been sent for testing to the Regional Disease Diagnostic Laboratory, Jalandhar.

An official of the Forest Department said a total of five birds, including a migratory bird, had been found dead in the lake so far.

Forest field officials and all others concerned have been kept on a high alert to keep a strict vigil and look for possible signs and symptoms or mortality among wild birds. —Debendra Dalai, Chief conservator of Forests, UT

The Animal Husbandry Department, UT, collected more than 200 samples from poultry farms, live markets, water bodies, etc, and sent these for testing. The results are expected in four-five days. The department said there was no cause of concern and there was no ban on poultry products in the city.

Meanwhile, the Forest and Wildlife Department, UT, today received the guidelines relating to avian influenza from the Union Ministry of Environment, Forest and Climate Change. The department shared the guidelines with the Department of Animal Husbandry and Fisheries, UT, and the authorities concerned to take all precautionary measures to check the spread of virus in case of any eventuality in Chandigarh.

Debendra Dalai, Chief Conservator of Forests, UT, said the forest field officials and all others concerned had been kept on a high alert to keep a strict vigil and look for possible signs and symptoms or mortality among wild birds.

Considering the gravity of the matter, all bird watchers, volunteers and visitors to the lake and any other water bodies have been kept on high alert and asked to note any unnatural symptoms in the birds such as diarrhea, head tilt, paralysis, sluggish behaviour, etc.

In case of noticing any such symptoms, they have been asked to report to the Department of Forest & Wildlife, Chandigarh, at its phone number 0172-2700217. Dalai requested the general public not to get panicked with any misleading information on bird flu or avian influenza in Chandigarh.

The UT authorities are on their toes after more than 2,400 birds of different species were found dead in Pong Dam in Himachal Pradesh and over a lakh chickens died in poultry farms in the Barwala area of Panchkula district.