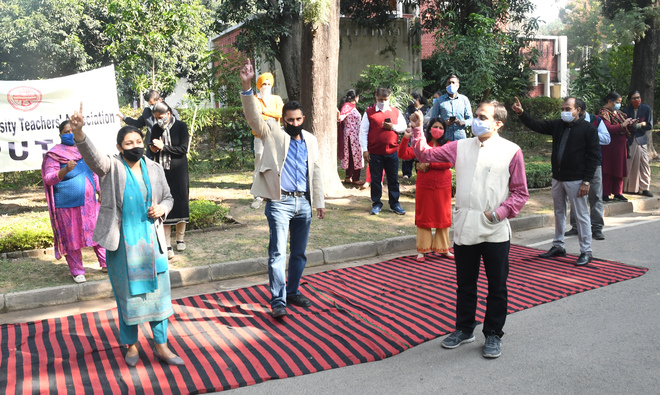 To protest against the sudden postponement of meetings of selection/ screening committees for pending cases of CAS promotions scheduled in November and December, the PUTA executive staged a dharna in front of the Vice-Chancellor’s camp office on Friday.

A meeting of the PUTA executive was held to discuss the sudden postponement of meetings of selection/ screening committees for career advancement scheme (CAS) interviews scheduled on November 21 and 22 by the Vice-Chancellor (VC).

Office-bearers of the PUTA executive shared when they met the VC yesterday in his office, he had assured to work on holding online meetings instead of physical and communicate with the president of the teachers’ body.

However, having received no such communication from the VC office in this regard till 3 pm, members expressed deep anguish and disappointment over the callous and indifferent attitude of the Vice- Chancellor towards teachers, who have been desperately approaching the PUTA executive.

PUTA executive said online meetings of the selection committees for CAS promotions were held at Punjabi University, Patiala, recently among other universities across the country. Therefore, there was no justification for not sticking to the schedule, which was finalised by the VC himself after PUTA executive staged a dharna on November 3 and the former held a meeting with the executive the same day, the teachers’ body added.

“In view of the anti-teacher attitude of the Vice-Chancellor, it was unanimously resolved that the PUTA executive will start an agitation till the matter is resolved to press for immediate holding of online/blended meetings of selection/screening committees for CAS promotions,” said PUTA executive.

Further, it was also decided that the PUTA executive would participate in every protest organised in future against the Vice Chancellor’s decision of not holding Senate elections and Syndicate meeting and creating a crisis in the administration of Panjab University.