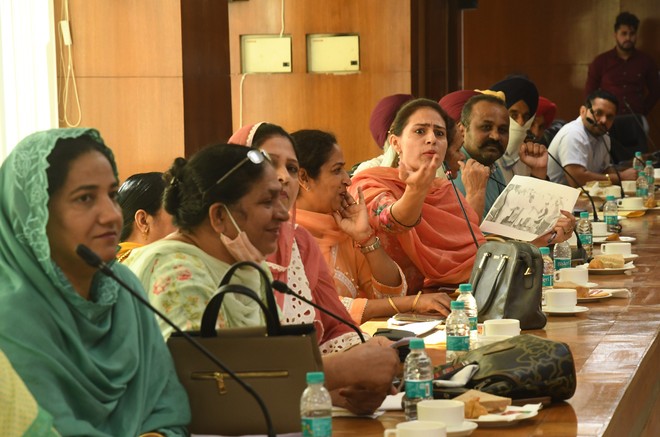 The MC House meeting underway in Mohali on Tuesday. Vicky

The MC House meeting was held under the chairmanship of Mayor Amarjit Singh Jeeti Sidhu. It also passed a resolution for the construction of a fire station in Sector 78 at the cost of over Rs2.92 crore.

The Houser confirmed the proceedings of the last meeting and that of the last two Finance and Contract Committee meetings.

A few councillors demanded reducing the fee of taxi stands and vehicles besides reducing the number of vehicles, which is 10 at present, at each facility. On this, Deputy Mayor Kuljit Singh Bedi asked for giving powers to the Mayor regarding amendment, which was accepted by the House.

A sum of Rs2.64 crore has been earmarked for purchasing boots, gloves, uniforms, rehris, trolleys and other items for nearly 1,000 employees to be recruited by the civic body for manual cleaning. The resolution was passed through tabled item.

Another important agenda passed by the MC House was outsourcing the work of mechanical sweeping of city roads. Under this, wall-to-wall sweeping of ‘A’ roads of the city as well as ‘B’ roads will be done mechanically. A sum of Rs37 crore will be spent on this work for a period of three years.

As in the previous meeting, this time too some opposition councillors alleged discrimination against their wards. To this, the Mayor said the work of all wards was being done with full transparency and no one was being discriminated against. He said if there was any work of a councillor in a ward, he or she could meet him directly anytime.