Open House: How Chandigarh MC can redress the problem of garbage collection and its disposal : The Tribune India 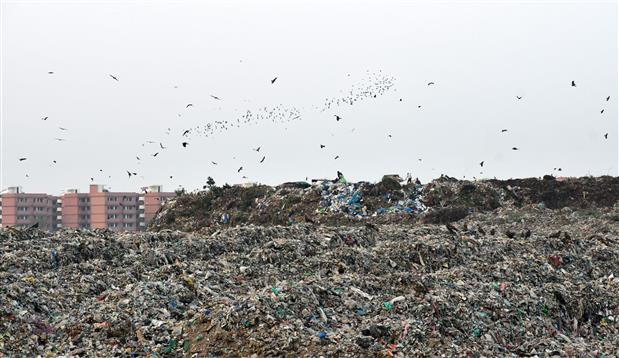 Heaps of waste at the Dadu Majra dumping ground in Chandigarh. File photo

Despite huge expenditure by the UT Administration on waste segregation and collection, it is quite disappointing to hear that the UNDP’s recent report still criticises the system. The main problem is with the garbage disposal, especially due to solid waste management plant lying defunct. This has resulted in a huge quantity of waste accumulating at the garbage dump in the recent years. Maintenance and upgrade of this garbage management plant must be done immediately. Awareness about segregation should also be spread using methods such as songs and street plays. There should also be an effort to listen to people’s grievances regarding disposal of garbage. An operational helpline number and a website portal should be set up for the purpose.

Composting technique could be of help

In vision document “Future Ready Chandigarh — 2030 & Beyond”, the United Nations Development Programme has found that among current challenges faced by Chandigarh residents, the most troublesome is garbage collection and its disposal. The Municipal Corporation should take immediate steps. Composting technique and incineration process can be helpful in redressing such problems.

In the vision document, the UNDP has rightly highlighted the most challenging problem of waste collection and its disposal in the City Beautiful. It is heartening that the MC has decided to install twin bins in all city parks and outsource the collection of garbage and its transportation to waste disposal sites. Besides, premier institutes like IIT-Ropar and NEERI, Nagpur, have been engaged to suggest appropriate technology for processing of solid waste management. City’s ranking in Swachh Bharat Survekshan could be improved further if the MC also takes up the issue of dung by stray animals littering city roads and pavements.

Garbage collection and disposal is one of the biggest challenges not only for garbage collectors but also for city residents. While constructing new houses, the Municipal Corporation must ask the Administration to mark space for a compost pit in the map of the house so that all kitchen waste dumped there should be converted into manure. MC officials should get pits constructed in one corner of parks so that people living on the second and top floors can dump their waste in the pits. The compost should be distributed among residents at a nominal rate. Sectors or societies giving zero wet waste to garbage collectors should be rewarded and all others should be encouraged to follow the same practice. Residents segregating waste properly should be suitably rewarded.

Cleanliness of the city, collection and disposal of garbage are major problems. The MC has to find some new methods and amend the old ones to deal with the issue. It should purchase new vehicles to collect garbage. Separate days can be fixed to collect dry and wet waste. Two separate plants should be installed. These plants should work 24*7 so that garbage can be processed the same day. Safai karamcharis should be strictly instructed not to let garbage pile up on the roadside.

The City Beautiful generates around 550/660 metric tonnes of garbage daily. Most of the garbage is dumped at the Dadu Majra site. It is not considered to be a satisfactory way of disposal and has thus resulted in lowering the city’s Swachh ranking. It is suggested that the Administration should go for a recycle plant at the earliest. City residents have already started segregating dry and wet waste. It is also suggested that the Administration should go for preparing manure from the garbage.

Problems of residents and waste collectors should be resolved in an effective manner. It will not be easy as both blame each other. The time of collectors should be fixed to collect the waste. There is no maintenance of garbage trucks. All routes must be checked periodically by officials to streamline the work. The concept of fine is not a good option.

It is quite disheartening to see that garbage collection and disposal still remain grave issues in the City Beautiful. It is high time the Administration pulled up its socks and adopted multi-pronged approach. To begin with, segregation is the key. Garbage collection, transportation and dumping are tedious tasks. Waste of each area can be handled within the area itself instead of carrying it over several kms to someone else’s neighbourhood. Segregation of dry and wet garbage should be done at the household level. Wet waste can be dumped in lawns and used as manure. Composting is a great way to reduce the pressure on the landfills. If every household starts composting its kitchen and garden waste, city’s daily garbage output will fall by one-third, if not halve. Plastic containers and bottles can be recycled and reused; and the dry waste can be given either to kabadiwala or the garbage collector.

Garbage should be collected by motorised twin-bin vehicles. Garbage collectors should lift the garbage from the doorstep from the first and second floors. Thus, garbage collection will automatically be improved. The MC Commissioner must personally monitor the progress. The official can take the help of technical and environmental experts and hire a competent agency to upgrade the processing capacity of the existing garbage processing plant.

Solid waste management is a term that is used to refer to the process of collecting and treating solid wastes. The most important reason for waste collection is the protection of environment and the health of the population. Waste can cause air and water pollution. The MC authorities must initiate scheme for incentivising the scheme for installing bio-compost plants by residents and institutions in the city. Bio-compost is quite suitable for making the lands fertile and growing vegetables and other crops and grass as well. The government should fund the installation of bio-compost plants and also, it should purchase compost from plant owners at the market price and distribute in the market by itself. Public participation in garbage collection and disposal is a big factor, which must be encouraged by the authorities. Every citizen should be duty bound to segregate incinerable and non-incinerable waste so that proper disposal can be carried out by the authorities. The MC authorities should also hold awareness camps in various sectors on a regular basis.

Municipal Corporations should provide colour-coded bags to citizens with clear instructions to make sure that right segregation of waste takes place. Timing for the waste collection should be ensured for every sector. Waste should be collected from the doorsteps of each floor. Hefty fines can be imposed to curb the habit of littering in public places. Timely salary to workers must be ascertained. The MC should conduct surveys from time to time on its own.

The Chandigarh MC could not sort out the disposal of garbage and its dumping due to its wrong policies. Separating wet and dry garbage could not be a successful process because of the irresponsible behaviour of city residents. The MC provided separate bins to residents, but only few of them used them. City residents must be made aware of using separate garbage bins. MC councillors visited several cities for improvement of garbage disposal, but it failed to yield the desired result.

It is absolutely true that people are facing foul smell due to garbage. The MC has failed to solve this problem. In fact, it does not make proper planning for garbage collection and its disposal due to a huge gap between precept and practice. It should give special attention towards cleanliness. It has a large open and wide space for dumping ground. It must shift the garbage dumping ground from Dadu Majra to another place away from the residential area. It should start garbage recycling at a new place. Recycling will create new job opportunities. Recycle plants must be far away from the residential area. Garbage should be collected from door to door in closed vehicles. All garbage dumping centres should be shifted from residential areas. Garbage should be collected/picked up from the streets carefully.

Stop garbage from piling up

The Municipal Corporation’s priority should be to recycle waste and stop creating heaps of garbage like in Dadu Majra. Organic waste should be recycled into manure. Waste such as polythene, paper and clothes should be reused and recycled into making roads, flower pots, garden benches and paver tiles. Waste that cannot be recycled should be used for refilling of low-lying landfills to improve flora and fauna of the City Beautiful. Use, reuse and recycle should be the mission of the Municipal Corporation.

The current policy framework of garbage collection and its disposal had much left to be desired. The roadmap to solve this problem necessitates evolving a clear and perennial blueprint, which must deal with the problem on a priority basis, having a pragmatic and effective solution. In addition, awareness programmes must be introduced, which entail the significance of clean environment for good health. Successful implementation of the policy depends upon a sense of responsibility and mutual cooperation of government agencies and individuals.

The UT Administration has been trying to improve the garbage collection & disposal system, but a lot remains to be addressed. Before the MC van comes, residents place garbage bags outside their homes, especially those living on upper floors. This is invariably littered by dogs. Green waste is dumped outside service lanes and doesn’t get picked for weeks together. The solution lies in stepping up the collection rounds and maintaining regularity. Covered dust bins marked with house numbers should be installed outside houses and big drums should be placed near service lanes for green waste. These should be disposed of by MC vehicles regularly.