Coronavirus infections also have been rising in neighbouring Croatia 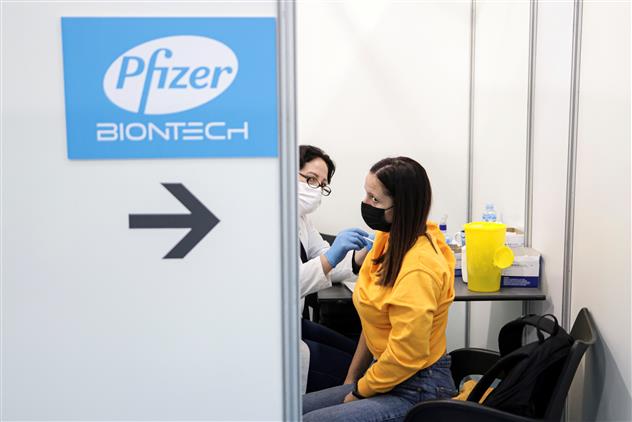 A healthcare worker administers a dose of Pfizer’s coronavirus disease vaccine to a woman at Belgrade. Reuters

Serbian Prime Minister Ana Brnabic said the new measure will take effect on Saturday and will be applied starting from 10 pm in bars, restaurants, nightclubs or any other indoor gatherings.

Infections also have soared in other Central and Eastern European countries where vaccination rates are lower than European Union average.

Brnabic said the introduction of Covid-19 passes will be confirmed at a government session on Thursday. She said late evening hours are when nightclubs have their biggest crowds. The passes will show a person’s vaccination status, or if they have recovered from the virus or tested negative recently.

“We hope this will boost vaccinations,” said Brnabic after a session of Serbia’s pandemic crisis group.

“This is the only way to beat the coronavirus.”

Serbia has had more than 1 million infections and nearly 10,000 deaths since the start of the pandemic. Around half of the adults in the country of 7 million have been fully vaccinated.

Coronavirus infections also have been rising in neighbouring Croatia, which on Wednesday reported more than 3,000 new cases, the highest number in months and about 1,000 more than last week.

Croatia also has a vaccination rate around 50% of its adult population. Media reported that people lined up Wednesday at a vaccination site in the capital of Zagreb following the latest uptick in infections. — AP