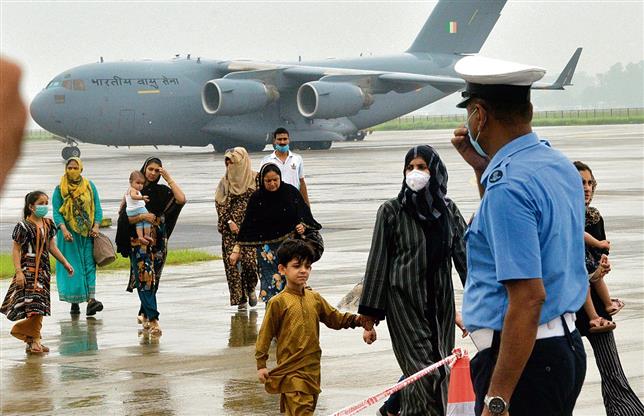 Indian and Afghan nationals arrive from Kabul by a special IAF flight in Ghaziabad on Sunday. Manas Ranjan Bhui

India on Sunday airlifted 392 people, including two Afghan lawmakers, in three different flights as part of the mission to evacuate its nationals and Afghan partners from Kabul.

A total of 168 people, including 107 Indians and 23 Afghan Sikhs and Hindus, were flown from Kabul to the Hindon airbase near Delhi in a C-17 transport aircraft of the Indian Air Force (IAF). They included the group of 150 that survived a midnight scare in Kabul, while trying to make their way to the airport. Another aircraft brought home 87 Indians and two Nepalese nationals from Dushanbe, a day after they were evacuated to the Tajikistan capital. The third flight brought back 135 Indians, who were evacuated from Kabul to Doha by US and NATO aircraft in the past few days. Most of them were employees of foreign companies and were airlifted along with workers of other nationalities by their employers.

Sources said immense help was provided by the US, Qatar, Tajikistan and other countries.

The group of 168 included two lawmakers Anarkali Honaryar and Narender Singh Khalsa. Khalsa broke down on his arrival in Delhi. He thanked the Indian Government and PM Narendra Modi. His father Avtar Singh was killed in a 2018 terror attack in Jalalabad.

However, Afghan Sikhs and Hindus, who are still in the war-torn country, slammed the two lawmakers for “secretly leaving them in the lurch”. In social media posts, they threatened to hold demonstrations. Sources said there could still be around 400 Indians in Afghanistan and the government was looking to evacuate them with the help of friendly nations.

Afghan lawmaker Narender Singh Khalsa, who was among those evacuated, said, “India is our second home. Even while living in Afghanistan, people would call us Hindustanis. I thank India and Prime Minister Modi for helping us.” On the Afghanistan situation, he said: “Can’t trust the Taliban. Everything built in the last

Polio vaccination for all returnees

Sources said there could still be about 400 Indians in Af and the govt was looking to evacuate them.

Sikhs and Hindus are going through a harrowing time, precisely why it was necessary to enact Citizenship Amendment Act. —Hardeep Puri, Union minister