Opinion polls show the right-leaning Conservatives of Erin O'Toole could win the September 20 vote, ending six years of rule by the left-of-center Liberals 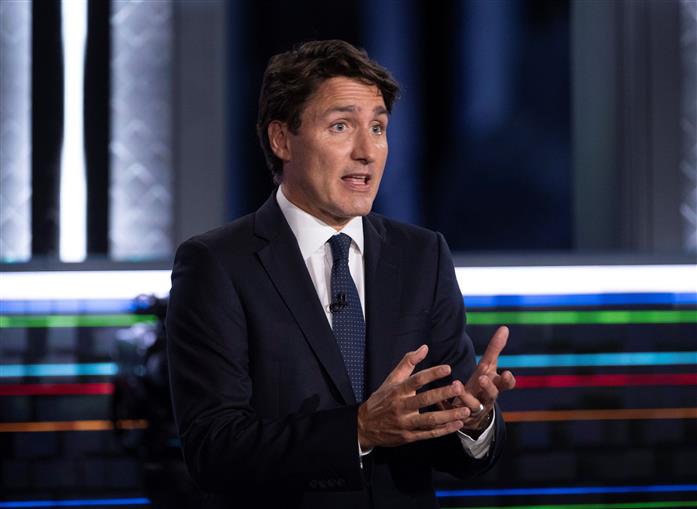 Canadian Prime Minister Justin Trudeau, facing a possible election defeat, on Wednesday lashed out at his main rival, accusing him of favouring restrictions on abortion and wanting to loosen gun controls.

Opinion polls show the right-leaning Conservatives of Erin O'Toole could win the September 20 vote, ending six years of rule by the left-of-center Liberals.

At the end of an otherwise unremarkable two-hour leaders' debate in French, Trudeau said O'Toole had sided with the gun lobby and wanted to overturn a Liberal ban on assault weapons.

He also said dozens of Conservative Parliamentarians had voted in favour of draft legislation to curb abortions that was defeated in the House of Commons in June.

"Mr O'Toole refused to tell Canadians what he wants to do.

He signs deals with special interest groups," Trudeau said. "He is offering weak leadership ... he can't be trusted." O'Toole, who has consistently attacked Trudeau's decision to call a snap election during the Covid-19 pandemic, retorted that the Liberal leader would "say anything to win" and said he was in favor of abortion rights.

Last Sunday O'Toole scrapped a campaign promise to eliminate a ban on some assault weapons after Trudeau accused him of cozying up to the gun lobby.

Trudeau called the election two years ahead of schedule as a referendum on his handling of the pandemic but has struggled to overcome voter fatigue.

Wednesday's two-hour debate was the second and final one to be held in French, which is predominantly spoken in Quebec. The province accounts for 78 of the 338 seats in the House of Commons and is crucial for any party seeking office.

The leaders will hold another debate on Thursday in English, the language spoken by two-thirds of Canada's 38 million population. An Ipsos Research poll for Global News on Wednesday put the Conservatives at 35% public support, with the Liberals at 32% and the left-leaning New Democrats at 21%. Reuters