Gates to the grand past

Though some have vanished into thin air, Tribune correspondent Manmeet Singh Gill and lensman Vishal Kumar lay bare the imposing nature of the 12 gates, first erected under the watchful gaze of Maharaja Ranjit Singh and his trusted counterparts to protect the city, before the invaders demolished the wall. 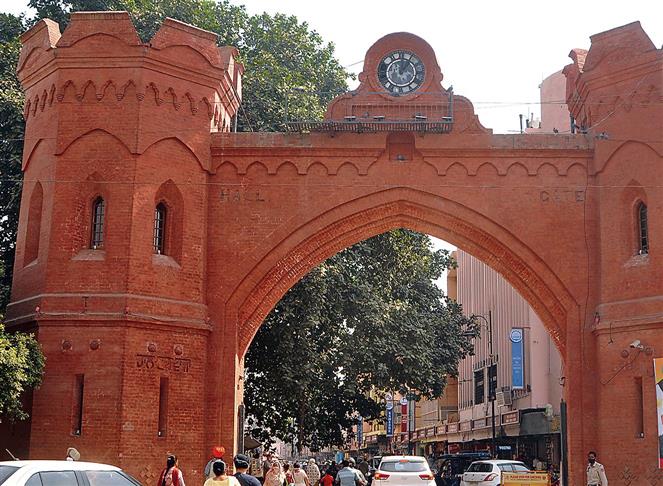 After taking control of Amritsar in 1805 Maharaja Ranjit Singh, in year 1822, began fortifying the city under the supervision of ‘buildings officer’ Ganesh Das. With the suggestion from Muhammad Yar Khan the construction of the wall started from Katra Maha Singh. Later, the baton was passed onto Maharaja’s trusted military general Sardar Desa Singh Majithia, who appointed his son Lehna Singh as the overseer of the work. The very first work was completed with Rs7 lakh deposited in ‘sarkar’s’ treasury from a well-known ‘sahukar’ — Ramanand. After Maharaja Ranjit Singh, his son Sher Singh continued with the construction. The total cost of the wall, including 12 gates and a fort named ‘Dhoor Kot’, amounted to Rs12, 40,460. Come 1849, when British annexed Punjab, Amritsar was a walled city. However, it was not long when the invaders decided to demolish the wall on the pretext that it was crumbling. It seems improbable that the strong fortification began decaying within a short span of 24 years. The historians believe that it was a military strategy to erase everything which could lead to a mutiny. The British, after demolition, started the construction of a new wall, which would have 13 gates instead of original 12. It was completed in 1885. The additional entrance, the Hall Gate built in 1866, is named after then Deputy Commissioner CH Hall. Though the name was officially changed to Gandhi Darwaza — after Mahatma Gandhi — but the ‘Hall Gate’ has stuck on. Similarly, the name ‘walled city’ remains glued – even though the wall fringing the area has long perished.

There were twelve strong gates in the city. Some of them were surrounded by defences with two or three brass guns. The Lahori Darwaza served as the main entrance on the road from Lahore. Moving in anti-clockwise direction, one is confronted by other gates of the city: Khazana, Hakeema, Rangar Nangalia Gilwali, Ramgarhia, Doburji, Ahluwalia, Deori Kalan, Rambagh Deori Shahzada and Lohgarh. The names of a few have changed since mid-19th Century.

A massive double wall of unbaked bricks, with a double moat was constructed by the Maharaja. Gurbaz Singh, in his work Tarikh-i-Punjab (Punjabi translation of the portion dealing with Punjab in Ahmad Shah’s Tarikh-i-Hind) writes that the fortification was 25 yards broad and 7 yards high. The circumference of the walled city was around 5 miles. The British had the moats filled and built a few police chowkis. The old wall was demolished and a new one rose. However, it, too, has perished and its later versions, renovated and reconstructed, are available at a few spots.

It is the 13th gate built by the British in addition to the 12 erected during the Maharaja’s era. It is named after then Deputy Commissioner CH Hall. It was named Gandhi Darwaza after Partition, but only for a short period of time. The original name remains. There used to be a prison at the place which was shifted to Gumtala after the construction began.

This gate used to have many baghs outside it. A prominent citizen of the time, Lala Sant Ram Sapra, also lived in the area. It is said to have acquired its name from the stable of elephants resting close by.

A road from the gate leads to Tarn Taran. It is rather young as it was recently built by the Ramgarhia community. In the old days, a ‘talab’, ‘sarai’ and ‘thakur dwara’ built by Mahesh Ram Khatri was a prominent attraction of the area.

The gate connected the city to Sultanwind, Verka and Doburji villages further connecting to the main road for Jandiala.

Many believe that gate is named after the Maharaja’s treasury, when in fact, it is named after a servant named Khazana, who owned the land on this side of the city. Going with the popular belief, the government around three decades ago got a ‘sandook’ built in the nearby chowk to depict treasure. A road from here also connected the city to Kasur (now in Pakistan).

With Lahore as the capital, the gate was most prominent among all the others built by Maharaja Ranjit Singh. A prominent place outside it used to be Bagicha Hakeem Gulab Rai, which, too, has been the victim of time.

The gate was built under the supervision of two hakeems — Noor-ud-Din and Chirag-ud-Din. As a route from here led to Patti, it was also known as ‘Majhe Wala Darwaza’. This also led to villages — Bharariwal and Fatehpur.

One of the most prominent of 12 gates, it was en route Maharaja’s Summer Palace, Ram Bagh to Darbar Sahib. It was through this gate that the Maharaja, during his stay in the city, would go to pay obeisance at Darbar Sahib. The Ram Bagh Deori, in close vicinity to the gate, was recently renovated by the government under heritage project.

A road starting from Lohgarh Gate had side shootings leading to the nearby towns, Majitha and Fatehgarh Churian. Qila Gobindgarh was the only strong establishment outside the walled city in that period. It links city to Gujranwala and Sialkot.

Presently, no gate exists at the place. A railway station outside the gate was built in 1908, which was called Bhagatawala station.

Lost in the mists of time, it is still named Gheo Mandi Darwaza. During the Maharaja’s reign, the gate was known as Ahluwalia Darwaza after Ahluwalia sardars.

No gate is seen at the site today. This used to lead to Harike Pattan and connected city to Gilwali village.