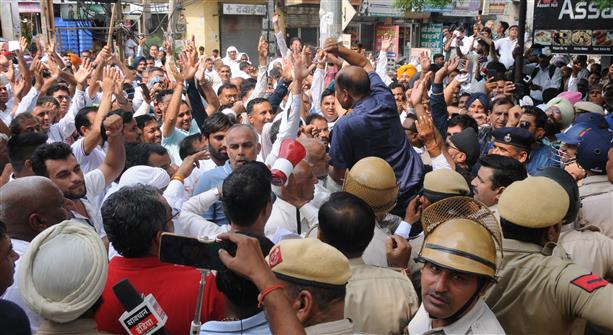 A large number of arhtiyas today held a state-level protest in the city against crop procurement via e-NAM portal. The protest was held on the call of the Haryana State Arhtiyas’ Association.

The protesters took out a march towards the CM’s camp office and tried to gherao that. The police, however, foiled their attempt and stopped them at some distance, where they began their dharna.

The govt is not paying heed to our demands. If our demands are not met, we will start an indefinite fast at the Karnal grain market from September 23. Ashok Gupta, leader, arhtiyas’ body

The issues of the arhtiyas should be resolved at the earliest as their demands are genuine. All procurement should be done through the arhtiyas. Vinod Goel, senior vice-president, Haryana rice millers and dealers’ assn

Arhtiyas handed over a memorandum to CM’s representative of the Karnal Assembly segment Sanjay Bathla, demanding the withdrawal of the government order of the procurement of the non-MSP paddy via e-NAM portal.

They also demanded 2.5 per cent commission on the produce, instead of Rs 46 a quintal, besides waiving 4 per cent market and HRDF fee on paddy crop.

State president of the association Ashok Gupta said, “We have been raising the issue for the past six years, but the government is adamant on implementing it forcibly, which is not acceptable. We started an indefinite strike on September 19, but the government is not paying heed to our demands. If our demands are not met, I, along with seven other arhtiyas, will start an indefinite fast at the Karnal grain market from September 23.”

President of the Karnal Arhtiyas’ Association Rajnish Chaudhary said the payment of PR varieties should be made as per farmers’ wish, adding that farmers from neighbouring states should be allowed to sell their produce in Haryana’s grain markets.