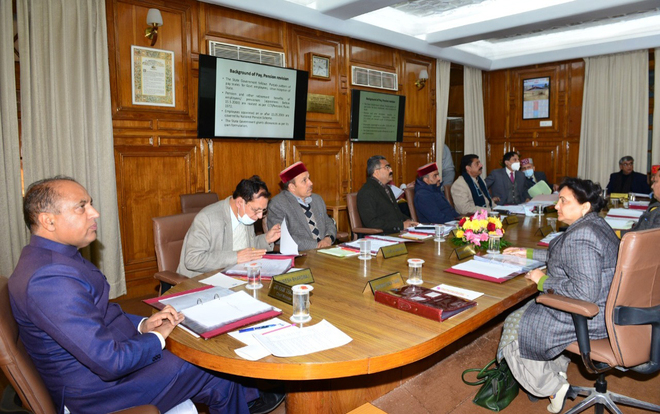 The Himachal Government today gave approval to the revised pay scales for about two lakh employees as per the recommendations of the Sixth Pay Commission, which will put an additional burden of Rs 4,000 crore on the exchequer.

The decision was taken by the Cabinet at its meeting chaired by Chief Minister Jai Ram Thakur here. The employees will get salary of January payable in February 2022 as per the revised pay scale. The government has already provided interim relief of about Rs 5,000 crore to the employees as part of arrears.

The government will have to spend Rs 260 crore as its contribution to the new pension scheme. A decision was also taken to enhance the salary of contract employees.

The Cabinet also approved the promulgation of the Himachal Pradesh Swarn Jayanti (Legacy Cases Resolution) Scheme, 2021 for settlement of arrears of tax, fee, interest, penalty, etc, which are pending for recovery. This will help in redressal of over 1.68 lakh cases and release the pending taxes under the Himachal Pradesh Land Revenue Act, 1954.

The Cabinet also accorded approval to the creation of new subdivision (Civil) at Kupvi in Chopal of Shimla district. It was also decided to upgrade the Ayurvedic Health Centre at Bassi in Shri Naina Devi in Bilaspur to 15-bedded Ayurvedic Hospital.

It will also issue a Letter of Intent to Mayur Industries for setting up a fruit-based wine and cider factory at Neri village in Sundernagar tehsil of Mandi district .

The Cabinet gave its consent to the draft of ‘Swarn Jayanti Gram Swarojgar (Parivahan) Yojana to allow the unemployed youth to ply 18-seater vehicles on the routes at concessional tax rates. The scheme will provide mobility to rural areas and also provide employment to them.