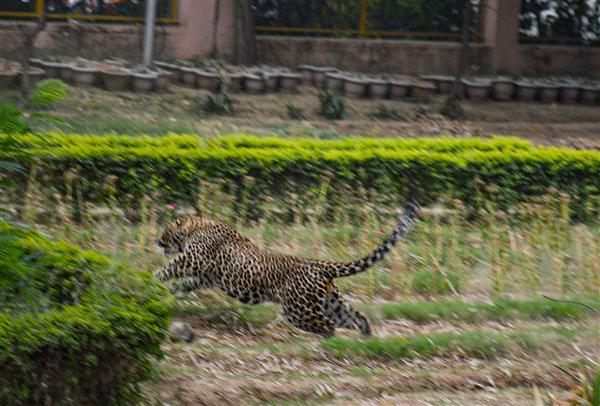 An adult leopard on Tuesday strayed into a posh locality of the city and attacked and injured three persons including two Wildlife Department officials before being captured in a rescue operation lasting over two hours.

Two wildlife officials, including a doctor, and a civilian were injured in the attack by the beast, the presence of which caused panic among the people in the Gandhi Nagar locality of the city.

The full-grown leopard attracted a crowd of curious onlookers, seen using their mobile phones to record the operation despite repeated appeals by authorities to disperse for their safety, officials said.

“We received a call about the presence of the leopard at a green belt area of Gandhi Nagar around 11.30 am and rushed rescue teams with tranquillizer guns and cages,” Jammu’s Wildlife warden Anil Kumar Atri told PTI.

He said the rescue teams managed to tranquillise the leopard and shifted it to Manda Zoo around 2 pm.

In the process, a wildlife doctor and a helper were injured by the leopard and were hospitalized.

A civilian, who was the first to be attacked by the animal, suffered serious injuries on his face and head, a police official said, adding he was shifted to the Government Medical College (GMC) Hospital.

He said police parties from Gandhi Nagar police station also joined the rescue operation and tried to keep away the people.

The leopard was spotted by a gardener inside the park and the Wildlife Department was informed immediately, the official said.

The leopard had ventured into the city from the nearby forest last week and was spotted in the Bahu Fort area of Jammu city after which the people in the locality and adjoining areas were asked to remain cautious, the officials said. PTI