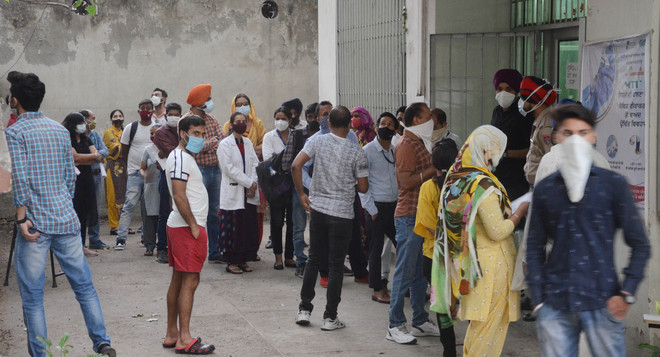 People wait for their turn for vaccine at the Jalandhar Civil Hospital.

The district reported eight more Covid-19 fatalities on Wednesday, taking the death toll to 810.Besides, the district also witnessed 387 fresh cases taking the infection tally to 24,132. Giving information about the Covid cases in the district, Civil Surgeon Dr Ranjit Singh Ghotra said the number of active cases in the district stood at 2,908 and 20,414 patients had recovered from the virus. Of 387 positive cases, 17 were reported from other districts, 80 from Hoshiarpur city and the remaining 290 from other health blocks of the district. Six patients of the district died at Hoshiarpur hospitals while two more died at Jalandhar hospitals. As many as 29 level-2 and nine level-3 beds are available at district hospitals.

Nawanshahr has been witnessing a rise in deaths and Covid cases. Today, six deaths were reported in the district, taking the tally to 267. The death rate is now 2.71 percent. Those who lost their lives are a 47-year-old woman from Sujjon block, a 57-year-old woman and 63-year- old man from Mukandpur block, a 51-year-old man from Urban Nawanshahr, a 74-year woman from Muzaffarpur block and a 80-year-old woman from the Saroya block. As many as 134 persons contracted the virus. The active cases now stand at 917, and the total number of positive cases till date stand at 9,849. As many as 820 patients have been getting their treatment at their homes. The recovery rate in the district has been reduced to 88.26 per cent.