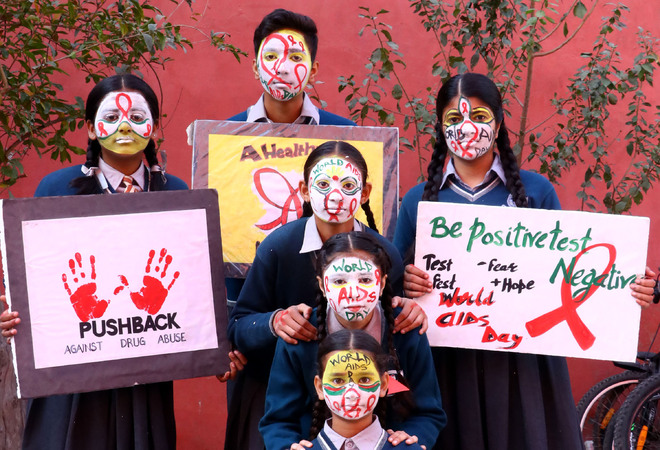 An awareness programme was organised at St Soldier Group of Institutions in Jalandhar on Tuesday. Tribune photo

A day ahead of the World AIDS Day, falling on Wednesday, a creative awareness programme was organised at the St Soldier Group of Institutions.

The students got their faces painted and sent messages of ‘Say no to AIDS’ on it. They depicted themselves as AIDS monster that destroys life. The students also wore a red ribbon symbolising their campaign against AIDS around their neck. Students were also holding banners, posters on AIDS awareness, in which they gave information on the causes, symptoms, precautions, importance of life, treatment etc.

Sangeeta Chopra, Vice Chairperson, St Soldier Group, appreciated the efforts of the students and said they have tried to spread awareness in a unique way. She said it was need of the hour to take the youth along in the campaign so that they can make the society aware.

Likewise, the Red Ribbon Club of Mehr Chand Polytechnic College organised an awareness rally against AIDS. A total of 120 students of the Department of Pharmacy took part in the rally. Principal Dr Jagroop Singh flagged off this rally. Speaking on this occasion, Dr Jagroop Singh said, “Students can play a vital role to aware the people about AIDS.”

President of Red Ribbon Club Prof Sundip Kumar said, “There are about 24 lakh HIV patients in the country. Contaminated needles and syringes were main cause of AIDS and hepatitis.” Students distributed pamphlets to spread awareness about the disease among people.