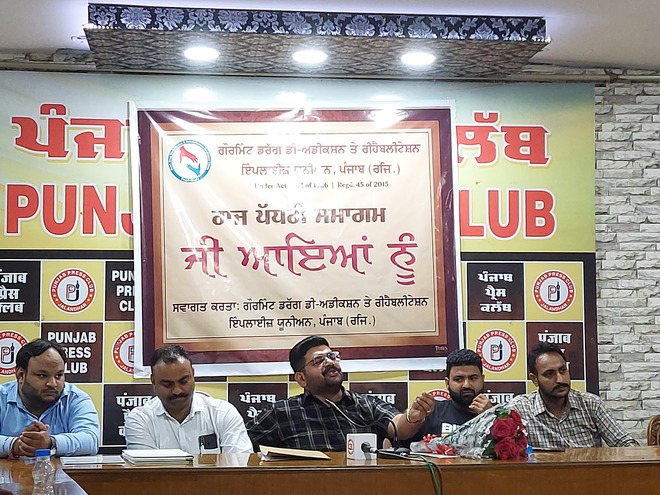 Contractual employees of the Government Drug De-Addiction and Rehabilitation centres and the Outpatient Opioid-Assisted Treatment during a meeting at Jalandhar Press Club on Sunday.

The contractual employees of the Government Drug De-Addiction and Rehabilitation centres and the Outpatient Opioid-Assisted Treatment (OOAT) clinics across the state have been demanding a rise in their salaries for the past four years. Forced to work overtime, the workers are also demanding that their services should be regularised.

Hired under the National Health Mission (NHM), the workers are seeking salaries on a par with the NHM workers.

Addressing members during a meeting at the Jalandhar Press Club on Sunday, Prashant Aadia, general secretary of the Government Drug De-Addiction and Rehabilitation Centre Workers’ Union, said though we provided our services during the Covid-19 pandemic and remained deployed in the isolation wards, we were not offered any relief in the shape of increment. Whereas the NHM workers were not only given a 12 per cent Covid relief increment but also a 9 per cent special service increment.

There are around 255 contractual workers and 600 outsourced workers working under the drug-free mission of the state government, who were inducted in the department in 2013 under the Cancer and Drug-Deaddiction Infrastructure Act Board 2013. The workers said there were currently around 22 de-addiction centres and 200 OOAT centres in the state. The union workers threatened to hold a protest on September 30 if the Health Department failed to address their demands. Like the previous year, the working of the OOAT and deaddiction centres could also be affected due to the strike, causing a great inconvenience to patients.

Parminder Singh, state president of the union, said they were working on meagre salaries. After their recruitment on various posts in 2014, the first increment of 6 per cent was offered in 2018. Owing to meagre salaries, many workers have already left their jobs. Now many posts of ward attendant and staff nurse are lying vacant.

Harman, a ward attendant who is receiving Rs 10,000 as a monthly salary, rues, “It has become almost impossible to run the household with a meagre salary. After the lockdown, our expenses have increased. While being posted on Covid-19 duty, we had to cover a distance of 80-100 km everyday on rented transport to reach our workplace, but the government never offered any travel allowance. Even after working for eight years, there is negligible increment in our pay scales.”

“We have been demanding the regularisation of our services for the last six years, but to no avail,” he added.

Parminder Singh said they were serving the state, but the Punjab Government was ignoring their demand of regular jobs. “Even after an extra load of patients during the lockdown, we never refused to offer our services and worked extra hours, but the government is unwilling to pay our rightful dues. It is very difficult to meet household expenses with meagre salaries. If we had been covered under the NHM, would we be getting salaries accordingly,” added Parminder.