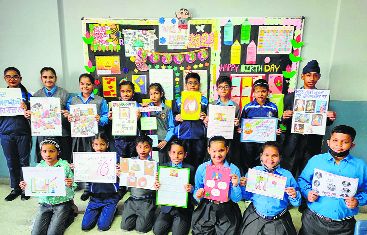 On the occasion of the 552nd Parkash Purb of the first Sikh Guru and the founder of Sikhism — Guru Nanak — various schools organised shabad kirtan and langar on the campuses. The school authorities exhorted children to follow the righteous path as shown by the guru. They sent across the message of Ek Onkar — One god.

Mayor World School celebrated the gurpurab with devotion and reverence. On the auspicious occasion, students of grade III , IV and V competed in ‘Inter-house shabad gayan- group singing competition’ . The topics for the competition were- ‘Kar kirpa tere gun gaavan’, ‘Waheguru Waheguru’, ‘Aaise preet karo mann merai’ and ‘Miti dhund jag chahan’. All the teams sung melodiously and mesmerised the audience with their performance. It purified the surroundings with its rhythmic resonating echo. The competition was won by Keats House, the second position was shared by Shakespeare and Dickens House.

The vibrantly dressed tiny tots of Mayor Galaxy also sang the shabad with such dedication and enthusiasm that it enthralled and captivated everyone present there. Chanting of the hymns created a tranquil and placid ambience. The event concluded with the “Ardas” and preachings of Guru Nanak, fervently presented by students of KG-I. They paid tributes to Guru Nanak by spreading his divine message of harmony, humility and equality.

It brought the unparalleled peace of mind and soul that one gets while meditating. Langar was served to everyone, regardless of their religion, caste or community. The occasion was graced by Director Sarita Madhok, Principal Harjeet Kaur Ghumman, Deputy Vice Principal Charu Trehan and the Headmistress Aarti Gulati. They blessed the students and said that such activities are important to connect the present generation with their roots.

The “Prakashotsav” of Guru Nanak was celebrated with great reverence and gaiety virtually and offline in all the five schools of Innocent Hearts Schools. Students of classes KG-1 to IX participated enthusiastically on this occasion.The little ones of KG-1 and KG-2 of Innokids Pre-Primary School donned traditional costumes. They went to the gurdwara and offered “Ardaas”. The children recited “Shabads” and “Mool Mantra”. Students of Classes VII to IX wrote articles on the life of Guru Nanak. The teachers of all the classes told the children that we should work for the betterment of humanity by following the path shown by the guru. They asked the students to make the teachings of Guru Sahib Ji ‘Naam Japo’, ‘Kirat Karo’ and ‘Vand Chhako’ a part of their lives and follow the path shown by him.

Sukhmani Sahib Path was organised on the auspicious occasion of Parkash Purb of Guru Nanak in various branches of St. Soldier Group of Institutions in which staff members, students and their parents participated. Together they recited the Path and learned about the teachings given by the guru. After the recitation, the students performed shabad kirtan. After that Ardas was performed for the progress of the institution and bright future of the students. Apart from this, guru’s langar was prepared and served to all. Chairman Anil Chopra, Vice Chairperson Sangeeta Chopra while congratulating everyone on Parkash Purb and asked everyone to adopt the three teachings given by the guru -”Naam Japo”, “Kirat Karo”, “Wand Ke Chhako” in life.

Parkash Purb of Guru Nanak was celebrated with great pomp under the supervision of Principal Navdeep Vashishta in Emm Aar International School, Adampur. On this occasion the children recited the morning prayer and threw light on the life of Guru Nanak. The message given by the guru was conveyed by the children. Emm Aarians chanted the Mool Mantra and connected everyone with the feet of the Guru. School Chairman Dr Sarav Mohan Tandon and Director Dr Simmi Tandon extended their best wishes on the occasion of Prakash Purb of Guru Nanak Dev. Manisha, Deepika, Richa Sharma, Sumiti, Shiv Prabha, Radha Sharma, Shivani, Ashwani Kumar, Satish Kumar and all staff was present.

Cambridge International School (Co-Ed) celebrated Guru Nanak’s 552nd Gurpurb with great religious fervour within the school premises. To commemorate the occasion, a special assembly was organised in the school. The assembly started with a soulful rendition of “Shabad” sung by the students. The philosophy and timeless preaching of Guru Nanak Dev was shared by the students in the form of a speech. The atmosphere of the school exuded religious fervour and divinity. On this occasion, Chairman Nitin Kohli, Vice Chairman Deepak Bhatia, President Mona Bhatia, vice president Paarth Bhatia and Director and Principal Dr Ravinder Mahal congratulated everyone on this momentous occasion and prayed that the words of the great Guru be enshrined in every heart and spread the message of humanity and universal brotherhood.

The Nobel School celebrated Guru Nanak Dev’s Parkash Purb in the school premises. The life of great saint, guru and a spiritual mentor on the occasion of the birth anniversary of Guru Nanak were highlighted among the young generation and the future of our society. The function commenced with the “Mool Mantra” by young student Ishrat Kaur Sandal of grade II. Followed by the singing of the holy hymns -”Shabads” by the students of grade I to XII added the sacred atmosphere and the spiritual ambience of devotional “Path” and “Ardaas” sparkled a religious fervour in the air. The teachers also participated in the Shabad Kirtan. Chairman of the school Prof CL Kochher and Managing Director Kumar Shiv Kochher stated that the teachings of Guru Nanak are of great significance to mankind and help in transforming the society in a better way. Adding to this, Principal Amita Sharma mentioned today’s youth need to inculcate the values of patience, tolerance, honesty, sharing and follow the path of equality, oneness and brotherhood as preached by Guru Nanak Dev to make the world a better place for one and all.

Sanskriti KMV School celebrated Guru Nanak Dev’s birth anniversary with devotion and reverence. The festive event commemorated with a prayer. Teachings of Guru Nanak Dev were remembered through eloquent speeches by the students epitomising their faith in his glory. A serene and calm atmosphere was created by soothing ‘shabad’ sung by the budding singers. The whole school was immersed in the diversified enchanting that raised their spirit and inculcated a sense of gratitude amongst them. Rachna Monga, Principal, spread the message of harmony and oneness. She apprised the students about teachings of Guru Nanak Dev and emphasised on following the path of universal peace and brotherhood. The programme concluded on a happy note with festive spirit and unbeatable excitement among the students.

PCM SD Collegiate Senior Secondary School for Girls celebrated Gurpurb to commemorate the exceptional sage on his birth anniversary. Principal Dr Pooja Prashar was the chief guest of the day. Sangita Sharma, Incharge of the collegiate block, made a cordial welcome to the principal. The event began with the recitation of “Mool Mantra”. The chief guest delivered a fruitful discourse on the quintessential and magnanimous figure of Guru Nanak and the phenomenal doctrines expounded by him. Students chanted “Shabad” on the occasion. They also narrated “Sakhies”, which are tales documenting the episodes from his life. Towards the close of the event, “Ardaas” was made. Monika expressed vote of thanks to the chief guest. Members of the managing committee and Principal acknowledged the endeavours of the Incharge and other faculty members wished everyone a Happy Gurpurb.