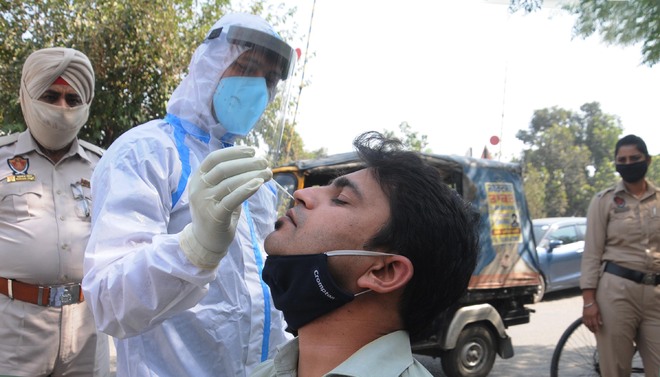 After two assistants tested positive at the CDPO office and eventually lost their battle against the virus, three Supervisors have also tested positive for the contagion.

They were tested soon after they started showing Covid symptoms. Besides, a lady attendant at the Children’s Home for Girls at the Gandhi Vanita Ashram also tested positive.

While the entire staff at the DPO office as well as the Gandhi Vanita Ashram had been tested for Covid after two assistants’ death, all remaining staff members on the two premises tested positive.

District Programme Officer, Gurvinder Singh Randhawa said: “The three supervisors had tested positive soon after the two assistants’ reports came. The staff members at the DPO and CDPO offices housed in the district headquarters were tested for Covid. Barring the three supervisors, all staff members at the DPO and CDPO offices tested negative. Tests of all children, staff and inmates on the Gandhi Vanita premises also came out negative. Only a lady attendant tested positive and she is in home quarantine. The three supervisors are also presently in home quarantine. The office was sealed for three days as per protocol after the employees tested positive. The respective offices opened only after the reports of all employees came out negative.”

While the Deputy Commissioner had assured that all inmates at Gandhi Vanita Ashram shelter home shall be tested, the meticulous exercise was carried out a day after the staff was tested.

The DPO said the employees of the other CDPO offices across the district were also being checked and as per protocol, the inmates of Children Home for Girls (whose lady attendant was presently under home quarantine) shall be tested again after some days.

Jalandhar: With 76 new cases, the district Covid tally reached 17,945 on Monday. Six deaths were also reported from Covid, taking the number of deceased persons to 561. The active cases in the district stand at 1,331. So far, 16,053 people have been discharged, while as many as 859 people are under home isolation in Jalandhar. Meanwhile in Kapurthala, six people tested positive for Covid-19. TNS

Hoshiarpur: With the arrival of 36 new positive patients in Hoshiarpur district, the tally increased to 6,971. The toll remains 255, as no death due to Covid was reported on Monday. Civil Surgeon Dr Jasvir Singh said with 764 new samples taken on Monday, the total number of samples taken in the district till date has reached 1,94,806. According to the reports received from the lab, 1,88,039 were negative, while 1,134 reports were still awaited and 133 were invalid. The number of active cases is 163, while the number of patients who have recovered is 6,553. Out of today’s 36 positive cases, seven were from Hoshiarpur city, while 29 were from the remaining health blocks of the district. There was no death due to Covid-19 in district for two days. OC