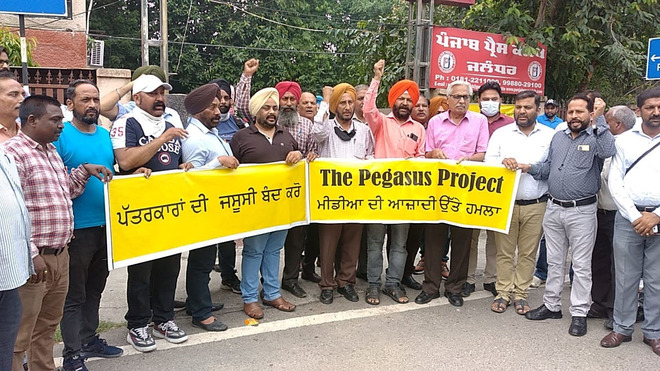 In opposition to spying on 300 people in India, including journalists, through the Pegasus Spyware Software by the Central Government, a protest march was organised by the Punjab Press Club, Jalandhar, on Wednesday.

A number of journalists participated in the protest march. Starting from the Punjab Press Club, the march proceeded to the Shastri Chowk. The journalists indulged in sloganeering against the government for spying on media and other personalities. They termed the case an attack on the right to privacy and on the freedom of press. Punjab Press Club president Dr Lakhwinder Singh Johal said the incidents of spying on journalists were unfortunate and this was against the spirit of the Constitution.

He demanded a probe into the serious matter. The journalists also sought that the Central Government should come clean on its position on the software used by the Israelite company, NSO, for spying on Indian citizens. An investigation was also sought to look into it that on whose behest the heinous crime was committed.

Journalist Satnam Manak said the journalists who dissented from the government were being heckled in some way or another. He sought the government should come clean on the software and its use which is wirth millions of rupees. The investigation should be carried by someone in a position no less than a Supreme Court judge. Journalists and mediapersons present on the occasion included Dr. Lakhwinder Singh Johal, Satnam Manak, Mandeep Sharma, Maklit Brar, Pal Singh Nauli, Sunil Rudra, Jatinder Pal Singh, Harvinder Singh Phul, Ranjit Singh Sodhi, Tejinder Singh Rajan, Pawandeep Singh, Jasbir Singh Sodhi, Nisha Sharma among others.