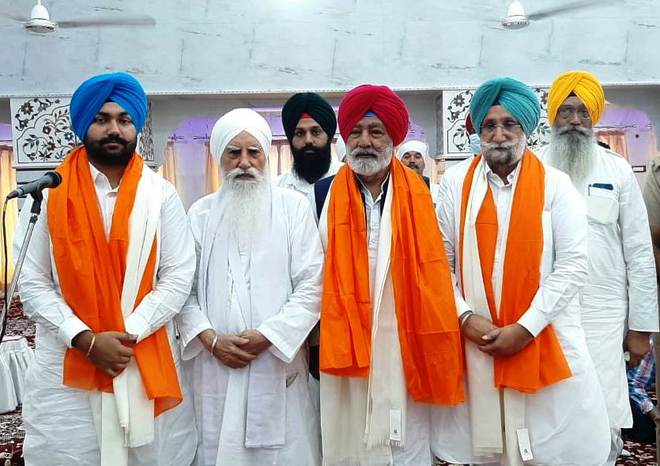 Deputy CM SS Randhawa and others at Gurdwara Rampur Khera

Strongly condemning the Lakhimpur Kheri violence, Punjab Deputy Chief Minister Sukhjinder Singh Randhawa on Tuesday demanded immediate removal of Union Minister of State for Home Affairs from the Cabinet to ensure a fair and impartial investigation as his son is directly involved in this ghastly act.

After paying obeisance at Gurdwara Rampur Khera Sahib, the Deputy Chief Minister termed the Lakhimpur Kheri violence as unfortunate. To ensure justice to the victim families of the innocent persons who were mowed down by minister’s son, the Union Minister of State for Home Affairs should be sacked from the Cabinet forthwith, said Randhawa. Accompanied by Forests and Labour Minister Sangat Singh Gilzian, the Deputy Chief Minister said acute scarcity of coal was the major cause of the current power crisis across the country but the Punjab Government was making all out efforts to ease out the situation in the coming days. He said the state government was purchasing electricity at expensive rates to cater to the needs of consumers especially farmers to nurture their crops. He said the situation would gradually become normal with more coal rakes coming to the state to overcome the coal shortage.

Pointing out further, Randhawa said he had already urged the Prime Minister for Mishra’s removal from the Cabinet to ensure an impartial and fair probe so as to do justice to the bereaved families. Keeping in view the enormous contribution made by the Punjabi farmers in successfully developing the agriculture sector in Lakhimpur Kheri and other parts of Uttar Pradesh by the dint of their hard work, Randhawa said such atrocities being inflicted upon them nowadays will not be tolerated at any cost.

On the sacrilege issues, Home Minister Sukhjinder Singh Randhawa said the accused had already been nabbed by the police, besides a probe is being carried out under an IG Rank Officer. He stated that justice in sacrilege cases would be ensured at all costs.

Soliciting fulsome support and cooperation from the residents, Randhawa said the state government was fully geared up to wipe out all sort of menaces from the state in order to make Punjab a healthier and prosperous state.