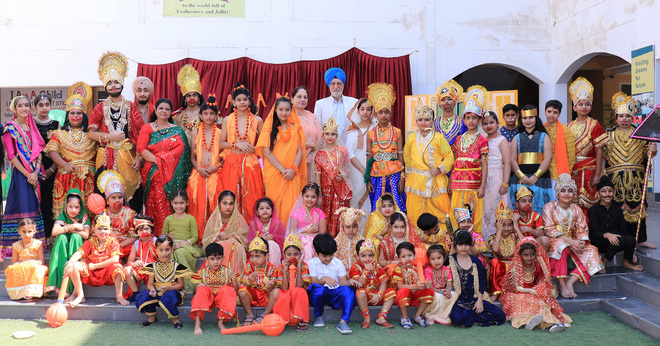 Students of the CT World School dressed up in different attire

Devotional dances, bhajans, speeches and PowerPoint presentations marked the Dasehra celebrations in schools of the city. Special assemblies were held and children danced to the beats of dandiya.

The festival of Dasehra was celebrated by the students of St Soldier Group of Institutions in which students played the role of Lord Rama, Lakshmana, Sita, Goddess Durga and Hanuman. The UKG students presented ‘Ram ji ki nikli swari’ and played dandiya. They also performed short drama and poetry based on Dasehra while burning the Ravana. While congratulating everyone on the occasion, Chairman Anil Chopra, Vice Chairperson Sangeeta Chopra told the children that the festival signifies the victory of good over evil and one should always follow the path of truth like Lord Rama.

State Public School, Jalandhar Cantt celebrated Dasehra with the kindergarten students. They were shown the dummies of Ravan, Meghnath and Kumbhkaran. The students were also informed about the significance of this pious celebration. They were narrated with the story which demonstrated how the good won over the evil. President and Vice-President of Group of State Public Schools Dr Narotam Singh and Dr Gagandeep Kaur along with Principal Savina Bahl, congratulated the students for the celebration and wished the entire school and society Happy Dasehra.

Keeping the festive spirit alive, Dasehra was celebrated at CT World School with great fervour. Students presented the epic “Ramayana” via a play followed by the burning of the effigy of Ravana. The participants mesmerised the students, guests and the digital audience with their charming smiles and presentation. They were adorned in attractive outfits. The guests for the day remained Charanjit Singh Channi, chairman CT Group, and Parminder Kaur Channi, Co-Chairperson, who were amazed to see the confidence and the energy level of the performers and were throughout immersed in the act. Madhu Sharma, Principal, CT World School, appreciated the efforts of educators and students for the programme.

To keep the festive spirit alive, young Ivyians took part in a variety of activities to mark the festival of Dasehra. Children spoke about the festival’s significance. They dressed up as any character from the Ramayan and played his role in the backdrop related to the festival. The day’s highlights were Dasehra speeches, a literary Ramayana, and dance to the Hanuman Chalisa. S. Chauhan, Principal of Ivy World School, addressed the kids, explaining that the objective of the celebration was to remind the pupils of the oft-repeated lesson that virtue triumphed over vice. President of Vasal Educational Society KK Vasal wished the teachers and students luck for the festival season ahead.

Yashasvi House of Police DAV Public School Jalandhar organised Dasehra celebration in the morning Assembly. A short skit was presented by students, which was based on how Corona can be defeated. Ravana was characterised as Corona, whereas Lord Rama was presented as vaccination who killed Ravana with the help of his army of masks, sanitisers and social distancing. Principal Rashmi Vij highly praised the efforts of Gurpreet Johal, the club incharge, and other teachers and students of Yashasvi House and motivated the students to follow Covid safety norms and those above 18 years to get vaccinated.

Vijayadashami, commonly known as Dasehra, was observed at the end of Navratri by the students and staff of Delhi Public School. A special assembly was organised under the guidance of Incharge Principal, Ritu Kaul for the children which began with a prayer followed by pledge and a video based on the theme - Clear your mind of can’t. The high-spirited DPSites of pre-primary celebrated Navratri festivities by decorating a Pooja thali and dancing to dandiya beats. The celebrations cascaded into Dasehra merriment and enthralled the little ones who created effigies for good and evil. The highlight of the assembly was interpretation about the festival by the students, signifying not only winning of good over evil but to raise awareness about the mental and physical disabilities in the hope of creating a better life for those with disabilities. Children participated in the discussion about the significance of this festival and gave their opinions. The essence of the Dasehra celebrations brought forth an understanding among the students to enlighten their minds with knowledge.