When the going got tough, they took to the wheels 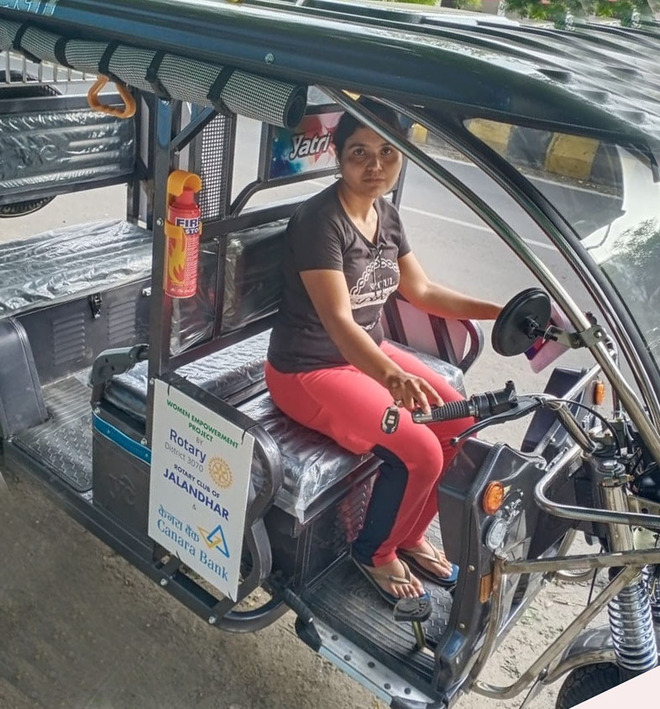 Breaking gender stereotypes, Pooja Rani (33) and Hardeep Kaur (35) have become the only women e-rickshaw drivers in the district.

Sailing in the boat of contentment, both women are striving hard to provide better education to their children. Sharing her story, Pooja, a single mother says, she opted for the occupation after she failed to run her vending business during the lockdown.

While it’s not the first time Pooja is earning a living for herself, she only desires that the new work helps her provide a decent lifestyle to her 7-year-old son. Interestingly, she also possesses nine years of experience as an accountant. After her marriage, she supported her husband by running a computer cafe shop, but things turned rough within a year of her marriage. She separated from her husband after she discovered that he was addicted to drugs and coming out from the bad marriage was the only solution for her.

“Prior to driving an e-rickshaw, I used to run a food-vending cart outside the court complex. Due to Covid outbreak, it remained a hand-to-mouth job, which wasn’t enough to pay the monthly instalments of my home loan and afford two-square meals. Subsequently, my job hunt ended up by becoming an e-rickshaw driver. I start my day at 9 am and manage to come home before 7.30pm, adds Rani, a resident of Karan Residency, near the Tower Enclave.

With a heavy heart, Rani continues: “Leaving my son alone doesn’t feel good but who will earn for us? However, I take a lunch break to be with my son and help him with his online studies.” Apart from affording her bills, she deposits EMIs of Rs12,000 and Rs2,500 for her home loan and e-rickshaw, respectively.

Similarly, Hardeep Kaur, a resident of Badshahpur village in Lambda is driving her e-rickshaw for the last two months. She is the sole breadwinner in her family of five. Due to some illness, her husband stopped working three years ago. Now, she has the responsibility of three children. After working for nearly eight hours, she earns Rs500-700 daily. She operates mostly on the bus stand-Nakodar road-Lambda route. Sharing her experience, she says: “This is the first time I’m driving any vehicle. Driving on a busy road petrifies me, but when I think about my children, nothing stops me. For me, a job is a job, I don’t care what people say. I want to provide a good career to my two boys and a girl, so I’ll do whatever it takes to reach that goal.”

Hardeep is also the first woman e-rickshaw driver in the town and used to run a tea stall before this. Notably, due to the initiative of the Rotary Club, these women are able to drive e-rickshaws. President Abhishek Chaudhary and project director Prabhpal Pannu said the initiative was taken to reduce air pollution and support the socio-economic empowerment of women. Before providing women the battery-operated three-wheelers we impart them on-road training. Pooja approached the Rotary Club after seeing Hardeep’s story on social media.