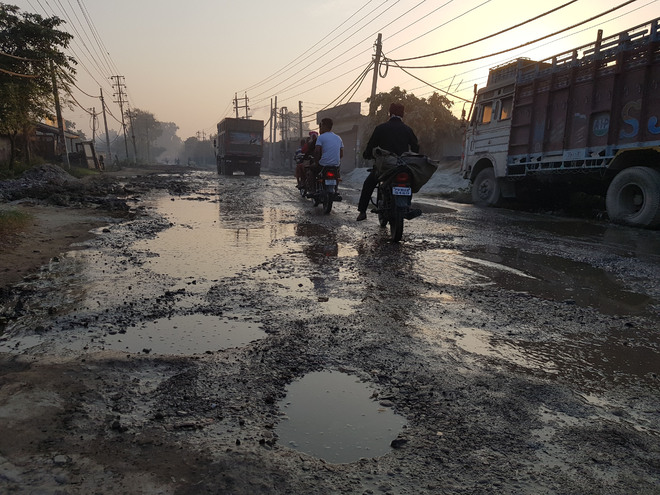 The badly damaged Rahon Road in Ludhiana has become a nightmare for the commuters as the authorities concerned have failed to ensure the timely repair of the stretch. Residents blame the government for ignoring the safety of commuters for a long time.

Portions of the road inside the MC’s limits as well as outside the MC’s jurisdiction are in a shambles, giving an open invitation to mishaps. Residents and shopkeepers have staged many protests over the condition of the road, but to no avail.

A stretch outside the MC’s limit near the Meharban police station is badly broken. The big potholes flooded with stinking water due to overflowing sewers are causing mishaps, but the pain faced by commuters is being disregarded.

This stretch (outside the MC’s jurisdiction) was earlier re-carpeted with money donated by some people. But, the water accumulation due to defunct sewer system and frequent movement of heavy vehicles caused damage to the road once again.

A villager said, “The sewer system was laid more than three years ago, but it had not been properly made functional till date. The MC had not allowed to connect the villages’ sewer lane with the civic body’s main sewer lane. Thus, the sewer lane keeps overflowing on the main road. Now, we have been facing a lot of inconvenience due to the broken stretch and overflowing sewers on this main road. We have staged many protests, but the government and the departments concerned ignored our voice.”

Sahnewal MLA Sharanjeet Singh Dhillon said he had raised the matter before the authorities concerned, but no action had been taken to get the road repaired. He blamed the Congress government for ignoring the poor condition of the road.

The overflowing sewer is also a major problem on the stretch and nearby colonies under the MC’s jurisdiction. The civic body’s project to lay new sewer lane is under way on the stretch under its limit. The road has been dug up from different locations to lay the new sewer lane. Thus, the commuters are forced to suffer a lot due to the poor condition of this stretch.

MC’s Superintending Engineer Rajinder Singh said the sewer work would be completed soon. MLA from Ludhiana East, Sanjay Talwar, said, “The tenders for the reconstruction of the stretch under the MC’s limits had been floated. Around Rs 5 crore would be spent on the road work that was likely to begin in next 15-20 days.”

“Besides, I will talk to the PWD Minister about the matter regarding the broken stretch outside the MC’s limit,” Talwar further said.

Executive Engineer, PWD, Adesh Gupta, said there was a major problem of sewer water accumulation on the broken stretch outside the MC’s limit due to which the repair work was getting delayed. The department concerned should resolve the problem of overflowing sewers first, he said.

It is learnt that a meeting between the PWD minister and officials of different departments was held a few months ago to discuss this road. As per information, the officials of the PWD, MC and other departments were present at the meeting.