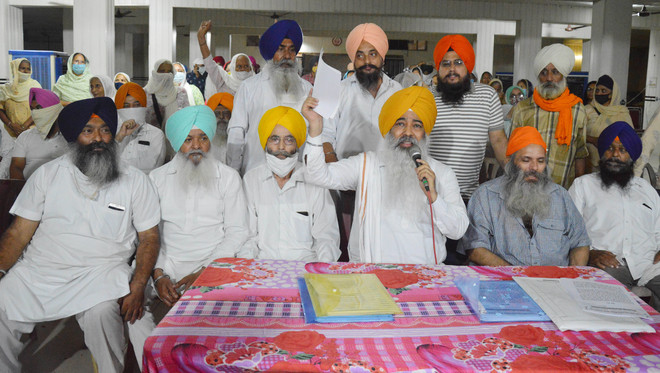 The 1984 Sikh Katle-Aam Peerit Welfare Society, backed by the SAD and the Sikh Migrant Rehabilitation Board, Punjab, having affinity to the ruling Congress, are fighting out a fierce battle where allegations are flying thick and fast.

While Surjeet Singh, president of the welfare society, has threatened to lay a siege to the residence of Cabinet Minister Bharat Bhushan Ashu here over nomination of an alleged Congress agent to the three-member sub-committee for making new red cards and scrutinising the old ones, Kartar Singh Patna, chairman of the Sikh Migrant Board, has termed it a frustration on the part of Surjeet Singh for being removed from the committee for alleged irregularities.

Interestingly, both Surjeet Singh and Kartar Singh Patna have levelled allegations of cheating the government against each other in obtaining cash grant as well as allotment of flats, booths and other properties.

At separate news conferences here today, the two leaders of the Sikh migrants charged each other with betraying the Sikh migrants and their families and both of them alleged that inquiries were being conducted by the district administration against each of the two for various irregularities, including forgery, fabrication of documents and cheating the government exchequer.

Kartar Singh Patna said Surjeet Singh, having affinity to the Shiromani Akali Dal, was making baseless allegations against Punjab Food, Civil Supplies and Consumer Affairs Minister, Bharat Bhushan Ashu simply because he had been removed as a non-official member of the government sub-committee for scrutiny of red cards issued to the Sikh migrants.