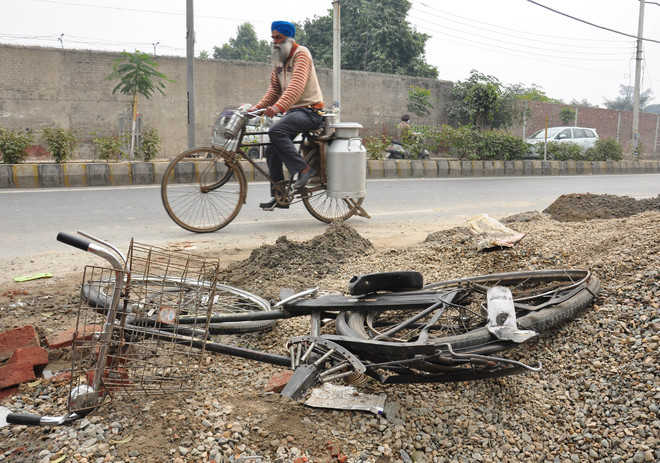 In a shocking incident, a man rashly driving Fortuner (SUV) allegedly hit Gurmeet Singh, a resident of Isrru village in Khanna, who died on the spot. Photo for representation purpose only

In a shocking incident, a man rashly driving Fortuner (SUV) allegedly hit Gurmeet Singh, a resident of Isrru village in Khanna, who died on the spot. Later, to make it a natural death, the suspect along with his friends threw victim’s body at the Ghungrali bus stand.

After recovering the body the police initiated inquest proceedings under Section 174, CrPc. As there were no visible injuries the police presumed that the victim had died due to natural causes like cold or excessive consumption of liquor.

Now, the Sadar police have registered a case of culpable homicide under Section 304 (culpable homicide) and under Section 201(causing disappearance of evidence of the offence), IPC, against the suspect, identified as Gagandeep Singh of Dhandari Kalan, Ludhiana, Harpreet Singh, Rohit Kumar and Gurman Singh, all from Payal, and two unknown persons.

Complainant Pardeep Singh, a farmer, said Gurmeet was his employee. On the intervening night of February 17-18, when Gurmeet was going home on his bicycle, he was hit by a Fortuner bearing the Chandigarh registration number, he added.

Later to avoid police action, key suspect Gagandeep called his relatives and friends, who took Gurmeet’s body and dumped it at the Ghungrali bus stand.

When the postmortem report of the deceased arrived, it hinted that the victim had not died due to natural causes, said Pardeep. Rather, he died due to serious injuries, he added.

Later, on checking the CCTV footage of the area shocking details emerged. The CCTV footage showed Fortuner going towards bus stand, which confirmed that the suspect killed Gurmeet.

“Although the police say Gurmeet was killed after Fortuner hit him, we suspect that he was first murdered and then his body dumped at the bus stand. We met the Khanna SSP today and urged him to register a murder case under Section 302, IPC, against suspect,” alleged Pardeep.

“If Gurmeet died after Fortuner hit him then he must have been crushed under the SUV or his body parts should have visible injuries,” he added.

The Kot police post in-charge, sub-inspector Sukhwinder Singh, said Gagandeep was arrested and raids were on to nab remaining suspects.