Less than 5% inoculated with Covid precaution dose in Ludhiana district

So far, less than half of 12 to 17 yrs children have taken second shot 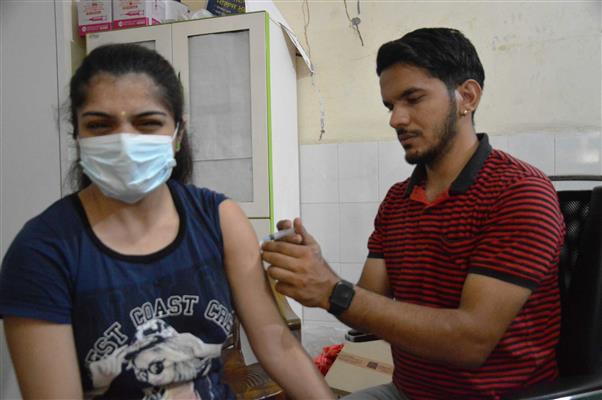 A woman gets vaccinated against Covid in Ludhiana. file

Even as the dreaded Covid-19 pandemic is once again raising its head with the sudden rise in daily and active cases, besides positivity rate, a key indicator of virus surge, going north, there are almost no takers for the precaution (third) dose of the vaccine to prevent the spread of the disease in the district, the administration has confirmed.

Though the precaution dose was being administered since April 10, almost four months from now, only 1,38,371, which accounted for mere 4.82 per cent of the total targeted population of 28,67,524 aged 18 years and above, had been jabbed with the third shot in the district till Wednesday, official figures have revealed.

This was despite the fact that the precautionary shot was being offered for free at all government Covid vaccination centres since July 15, with an aim to increase the take of the third jab among eligible adult population under the 75-day, “Covid Vaccination Amrit Mahotsava”, being observed across the country till September 30.

If adults are hesitant to get the precaution dose, the children aged 12 to 17 years are not even forthcoming to take their second shot, the average of which is even way less than 50 per cent, in the state’s biggest and largest district, in terms of the area and population.

The Covid vaccination figures compiled by the district administration, a copy of which is with The Tribune, indicate that 42,483 children aged 12 to 14 years have been fully vaccinated in Ludhiana, which is just 38.94 per cent of the total 1,09,086 identified population in this age group.

Similarly, 78,990 children aged 14 to 17 years were fully vaccinated in the district so far, which accounted for 44.14 per cent of the total 1,78,952 targeted population under this age group.

Likewise, all eligible persons aged 18 years and above are also not yet fully vaccinated as 24,38,808 beneficiaries, which is 85.05 per cent of the total 28,67,524 targeted population in this age group, have been administered the second dose in the district till date.

However, beneficiaries of the first vaccine dose were comparatively much higher in the district.

}We are holding camps at almost 200 sites daily for administering free vaccine against Covid to population aged 12 years and above. Besides, special vaccination camps are also being held for industrial workers. We urge residents above 12 years to get themselves fully vaccinated while 18 years and above should come forward to take precaution dose. — Surabhi Malik, Deputy Commissioner, Ludhiana