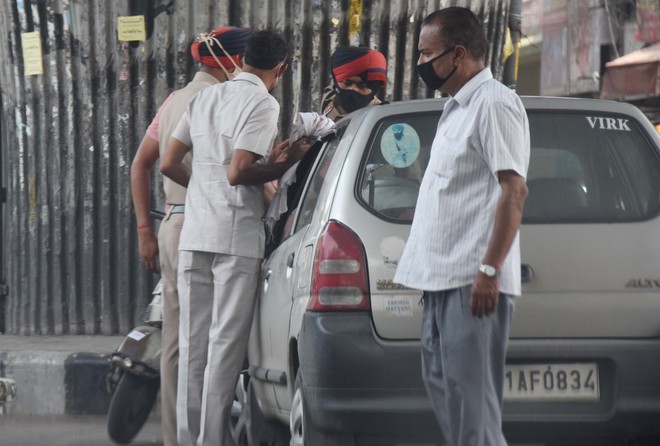 Cops issue a challan to a lockdown violator in Ludhiana on Monday. Photo: Ashwani Dhiman

Though the police had built up immense pressure for effective implementation of the weekend lockdown and daily curfew, violations of prohibitory orders continued, albeit a few, from various parts of the city.

On Sunday, the police lodged eight FIRs under Sections 188, IPC, while in a few others, Section 269, IPC, and relevant Section of the Disaster Management Act were also invoked. Three persons were arrested and six others were booked for lockdown and curfew violations.

The police said among those arrested for keeping their shops and commercial establishments open during the weekend lockdown were a dhaba owner, Anees Ahmad, from near Basant Park and two others, Gama Sahni of Tilak Bayania village, and Sita Ram, a resident of Tareni village, both in Uttar Pradesh, for loading migrant passengers in a bus (bearing a Uttar Pradesh registration number) for ferrying them to various destinations in UP.

Among those booked for violations were Bhola, owner of Malwa Chicken near Girja Ghar Chowk, Harnek Singh, a meat seller in Islam Ganj, Chintu, a fruit vendor in Field Ganj, Rohit Katna, a vegetable seller in Ahata Sher Jang, owner of Aman Chicken near Hero Bakery Chowk on Pakhowal Road and Dalip Saini, a fish seller on Tajpur Road.

Deputy Commissioner-cum-District Magistrate Varinder Kumar Sharma has notified four sites as temporary jails in the city to lodge people who would be found violating curfew imposed to contain Covid-19.

The District Magistrate said the temporary jails had been set up at New SD School on Bahadurke Road, indoor stadium on Pakhowal Road, Guru Nanak Stadium and Valmiki Bhawan in Moti Nagar.

He said these sites would become functional as temporary jails and violators would be detained in the open jails.

He said ADCPs Pragya Jain, Jaskaranjit Singh Teja, Sameer Verma and Rupinder Kaur Saran had been appointed as superintendents of these jails.

He said people who would be seen roaming around the city without any reason would be rounded up and detained in open jails.

Notably, the daily curfew is imposed from Monday to Friday from 12 noon to 5 am. On these five days, relaxations from the daily curfew for all categories of shops, private offices and establishments will be between 5 am to 12 noon. The weekend curfew will be from 12 noon on Friday to 5 am on Monday.