First seizure of illegal drugs was made in Sept this year; key accused generated fake invoices 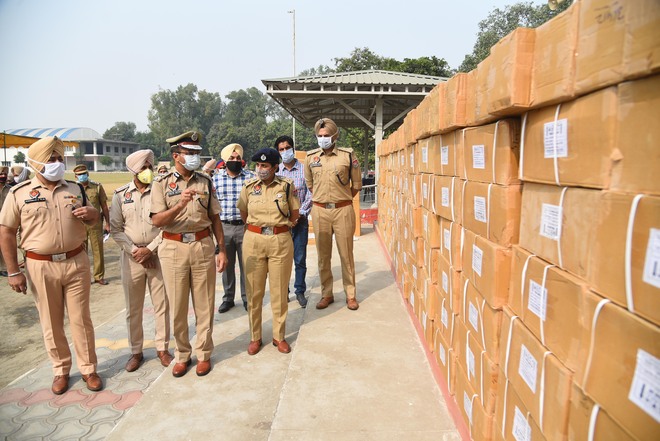 The ongoing probe by the Ludhiana police into the recovery of illegal drugs worth Rs 4 crore has led to the whopping recovery of more banned drugs worth Rs 6 crore from Jaipur, Rajasthan. These drugs were being supplied to Punjab, Haryana, Delhi by the accused.

Agrawal said the first recovery was made in September this year when the police arrested Dhamanpreet Singh and Ranjit Singh of Ludhiana and recovered 22,000 pills (tramadol and alprazolam), 50 bottles (chlorpheniramine maleate and codiene phosphate syrups) and a Swift car.

During interrogation, they revealed that they had purchased these drugs from Arjun Dev and Gulshan Kumar of Alwar, Rajasthan, and both were arrested from there. Both accused had named Prem Ratan of Jaipur, the main supplier. Then Prem was arrested and the police recovered 99,600 banned syrups and other banned drugs worth Rs 4 crore from his godown in Jaipur.

“Now, when Prem was interrogated, he confessed that he had got three big consignments of drugs, of which two were seized by the police, while one consignment was lying at a godown in Jaipur where illegal drugs worth Rs 6 crore were lying and his aide Varinder Kumar Rinku of Jaipur was looking after the godown,” the CP added.

After nominating Varinder in the case, a raid was conducted at a godown in Jaipur from where illegal drugs worth Rs 6 crore were recovered. The accused Varinder managed to escape from the police net.

The cops also recovered 12 other types of medicines worth Rs 34 lakh which he had stocked without any permission and were seized by the Rajasthan Drug Control authorities.

ADCP Teja said Prem Rattan, the main accused, used to procure pharma drugs (banned in Punjab) from various pharmaceutical manufacturing companies without having any valid legal licence. He used to generate fake invoices in the name of some medical stores and registered practitioners and re-routed these drugs to smugglers at a higher price. The profit margin was very high as they used to sell these at three times the MRP. The pharmaceutical companies kept on supplying these consignments even to buyers without a valid licence.