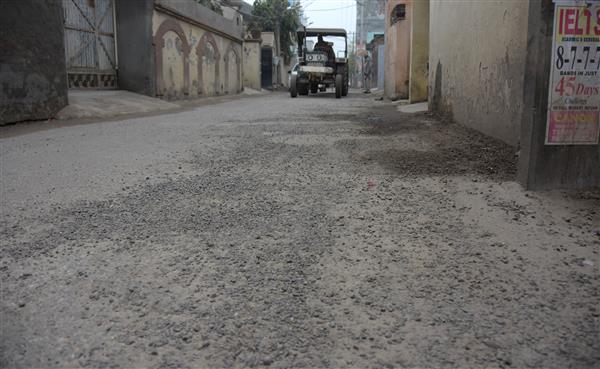 Commuters have been facing inconvenience as many roads are in poor state in Ludhiana. Ashwani Dhiman

Under pressure from their political masters, officials of buildings and roads (B&R) branch of the Municipal Corporation had gone ahead with the construction of new roads and recarpeting several broken or damaged roads in extremely cold weather conditions which was not supposedly conducive even for patch work and results are there for everybody to see.

According to MC officials, several road projects were executed during the past two months at a huge expenditure and repair works were also carried out on many other damaged roads at a cost of around Rs10 crore.

Most roads in the city, including the ones newly laid or recarpeted or even those where repair works were carried out, lie in a pathetic state with loose gravel, peeled-off top surface and deep potholes, causing huge inconvenience to residents.

This would be no consolation, at least for the suffering city population that taking serious note of the negligence on part of the officials concerned, the MC Commissioner has not only ordered a third party audit of the quality of workmanship and material used in laying/recarpeting of roads but has also issued directions for not releasing any payment for road works till the report of the quality check was received. The officials have also been directed to get the damaged roads repaired or even reconstructed, if desirable, at the cost of the contractors.

According to MC officials, several road projects were executed during the past two months at a huge expenditure and repair works were also carried out on many other damaged roads at a cost of around Rs 10 crore.

“The MC officials were under immense pressure from leaders of the ruling party to complete construction of roads in adverse weather conditions, which has led to rotting roads across the city, due to the Assembly elections which were due in February and expecting model code of conduct coming into force any time, ” said an MC official.

With a large number of newly constructed and recarpeted roads getting peeled off and broken down, commuters on Hambran Road, Pakhowal Road, College Road, Model Town, Dugri, parts of Ferozepur Road, Lodhi Club Road and many more in old city areas were a harassed lot.

“To make the matter worse, even the repair works on these damaged roads was not possible in the prevalent weather which meant that residents would continue to bear the brunt of negligence on the part of the MC officials for some more time,” said a harassed resident of Dugri.