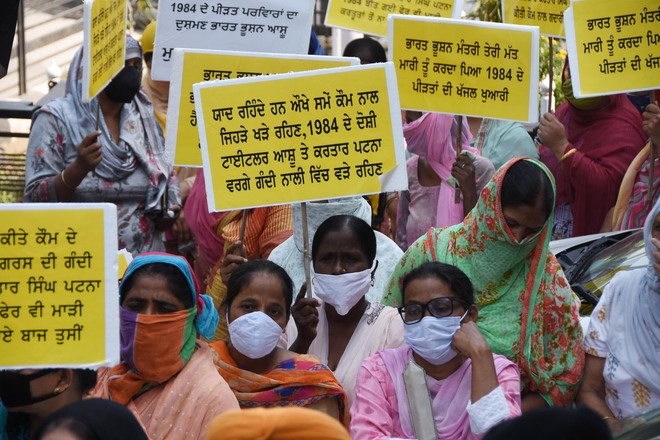 Anti-Sikh riot victims stage a protest at the DC office on Tuesday.

Led by Surjit Singh, state president, and Gurdeep Kaur, president of the women wing of the 1984 Sikh Katle-Aam Peerit Welfare Society, the riot victims and members of their families today held a protest at the Deputy Commissioner’s office in Mini-Secretariat here against nomination of a Congress activist to the three-member committee set up for scrutiny and verification of red cards of the riot-affected persons.

An 11-member delegation of the society met Deputy Commissioner Varinder Kumar Sharma and alleged that the newly nominated member of the said committee, Kartar Singh, and his supporters were making false and frivolous complaints against the riot victims. Surjit Singh and others charged the member of the committee with getting some 160 cards of bona fide riot victims cancelled.

The delegation claimed that the society, led by Surjit Singh and Gurdeep Kaur, had worked tirelessly to get around 7,000 residential flats and booths allotted to victims and their kin across the state. They also charged Kartar Singh, heading a rival body of riot victims, with committing several irregularities and deriving undue benefit from the state government.

Surjit Singh claimed that the Deputy Commissioner had assured the delegation that the constitution of the three-member committee would be reviewed and the necessary action taken to give representation to the society in the said committee. An assurance was also given to address other pending issues of the riot affected families, said the president of society.